U.S. Sailing has announced recipients of the 2015 Yachtsman and Yachtswoman of the Year awards. Steve Benjamin, Norwalk, CT, and Annie Haeger, East Troy, WI, beat out a shortlist of sailing greats to be honored at the annual event, held this year at New York YC. Both Benjamin and Haeger had a year to remember and will be recognized as the best of 2015.

Benjamin was named the 2015 Rolex Yachtsman of the Year in recognition of a year that featured 10 wins, including the Etchells North American Championship in Rye, NY. Haeger was named the 2015 Yachtswoman of the Year for her impressive list of top results in the 470 Class competition throughout 2015. The two were picked from a shortlist of 12 men and six women based on nominations submitted by members of U.S. Sailing.

Established in 1961 by U.S. Sailing and sponsored by Rolex Watch, U.S.A., since 1980, the annual presentation of U.S. Sailing’s Rolex Yachtsman and Yachtswomen of the Year awards are considered the sport’s ultimate recognition of an individual’s outstanding on-the-water achievements for the calendar year. 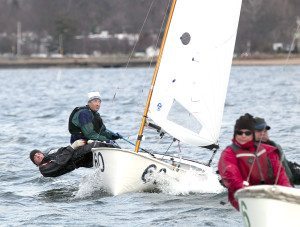 Benjamin captured sailing’s holy grail in recognition of his dominance in the Etchells fleet that went beyond the North American Championship. He placed second out of 43 boats at the World Championship in Hong Kong. His teams won at the Piana Cup, Long Island Sound Championship and Coral Reef Cup, among others.

Steve and Heidi Benjamin’s Carkeek 40, Spookie, had a clean sweep of overall wins in every offshore race they entered in 2015, including Fort Lauderdale to Key West, Marblehead to Halifax, Ida Lewis Distance Race and the Vineyard Race.

In reflecting back on his successes, Benjamin commented on how everything came together for him and his teams in 2015. “It came down to all the quality time we were able to spend on the water together. We raced and practiced so much this year, it really helped us continue to improve from one event to the next, and be better teams.”

“This award goes to all the great sailors and crew I’ve had the
opportunity to race with this year,” added Benjamin. “I had some incredible team members to help me every step of the way, and perhaps the biggest supporter of them all is my wife, Heidi. I’ve been at this a long time, so this is truly an astonishing honor.”

Benjamin, son of a boatyard owner, started sailing at the age of nine when his parents introduced him to the sport through a junior sailing program at Seawanhaka Corinthian YC in Oyster Bay. He earned College Sailor of the Year honors in 1978 as a member of the Yale University sailing team.

Benjamin is a name easily recognized by our local sailing community. During the winter, Benjamin campaigns an IC Dinghy out of Larchmont YC and most recently was battling the tides and winds of Manhasset Bay at the Annual New Year’s Regatta. While Manhasset Bay proved troublesome for Benjamin and his crew Brooks Daley, not an unusual occurrence, he is one great frostbiter. But Benjamin just doesn’t race in the regattas. He promotes the sport of winter sailing. Back in 2007, Benjamin and his wife Heidi, who have won the IC Dinghy Nationals three times in Wharf Rat, dedicated a new trophy for winter racing, the Wharf Rat Challenge. This new trophy is awarded to the skipper who receives the highest points over the frostbite season. To qualify, each team needs to compete in three of five regattas, but must race in the Nationals.