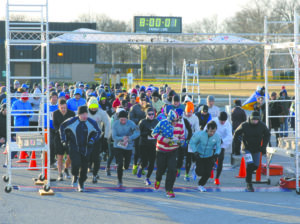 On Sunday, March 8, residents of Port Washington will have the opportunity to participate in a five-mile winter run at North Hempstead Beach Park, located at 175 W Shore Rd. in Port Washington. Runners will loop around the park by heading north and then south along West Shore Road and will conclude the race back at the park. The race will begin at 9 a.m. and conclude around 1:15 p.m.

The race is open to participants ages 13 and older, who can run the race in 75 minutes or less. Children under the age of 16 must be accompanied by a parent or guardian. Adults who are accompanying a child and not participating in the run must pay a $10 fee to enter the heated tent after the race. Fee/admission is $50 for ages 21 and over, $35 under 21.
After the run, there will be a post-race party featuring a heated tent, live music and refreshments. Runners over the age of 21 will receive a bracelet, which will allow them to enjoy beer from the Greenport Harbor Brewing Company. The brewing company will be producing a small special batch of beer especially for the race.

This run is a USA Track and Field sanctioned race; strollers, skateboards, bicycles and dogs will not be permitted during the race. Participants may pick up a race pack beginning on Friday, March 6 from 6 to 8 p.m. or on Saturday, March 7, from 10 a.m. to noon at the Community Chest of Port Washington, located at 382 Main St. in the ground floor conference room, (the entrance on Main Street), or on race day, Sunday, March 8, from 7:45 to 8:55 a.m. at the North Hempstead Beach Park parking lot.

The Port Washington Police Department (PWPD) issued a traffic advisory to residents in advance of the event. According to the PWPD, West Shore Road will be closed to vehicles traveling east and south from Beacon Hill. For vehicles traveling north on West Shore Road from Roslyn, West Shore Road will be closed just north of Fairway Drive. Fairway Drive will be accessible from the south and exiting traffic must turn right. Beacon Hill Colony traffic will be able to exit the neighborhood on Marginal Road and into Beacon Hill. Residents can expect the roads to close beginning at 8:30 a.m. and reopen at approximately 10:30 a.m. Residents should adjust their travel plans accordingly.

—Additional information provided by the Community Chest of Port Washington