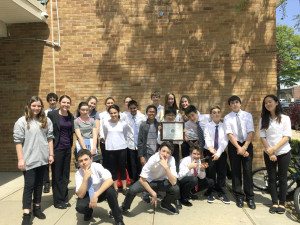 The silver designation is the second-highest honor awarded at the NYSSMA festival. This is the first time the Weber jazz band has participated in the event, performing three pieces for the judges. Members range from grades 6 to 8. According to seventh- eighth-grade band teacher and jazz band Director Elizabeth Andrew, auditions were held at the start of the school year and members met on a weekly basis at 7 a.m.

“We are very proud of Ms. Andrew and all of the students in the Weber jazz band,” said Port Washington Director of Creative Arts K-12 Kevin Scully. “They represented Weber not only with their musical skill, but also with their commitment to all of the extra practice that is needed to present such a fine performance.”