On June 23, Long Island Democrats have the chance to shake up Congress thanks to a hugely important local primary between the incumbent, Tom Suozzi and his grassroots challenger, Melanie D’Arrigo. I respect Rep. Suozzi’s years of public service and believe there is little doubt that he would be superior to just about any Republican opponent. But at this crucial point in our nation’s history, just good enough is not a viable option. We need a fighter with the courage, creativity and intelligence to take on the powers that be and offer an inspiring vision of the future. Melanie D’Arrigo is such a candidate.

Melanie is a working mom, healthcare advocate and community activist who grew up on the South Shore of Long Island and now lives in Port Washington. She ran Tony D’Urso’s successful Assembly campaign, devoted hundreds of hours to helping turn the NY state Senate blue, and decided to run for office herself after protesting the Kavanaugh hearings in DC with her young daughters. She is running on an unapologetically progressive platform. Melanie is opposed to corporations buying off politicians; believes health care is a human right and that women should be able to make decisions about their bodies; supports the Green New Deal and a just transition to renewable energy; values immigrants and opposes the criminalization of migration; believes in equitable taxes and an economy that works for everyone; and supports racial equity, educational equality, common sense gun safety laws, union organizing and justice for communities that have been left behind – by Republicans and Democrats – for far too long.

Despite serving in Congress for nearly four years, Rep. Suozzi’s biggest “accomplishment” is being Vice-Chair of the “Problem Solver Caucus” – a bipartisan group of congressmembers who attempt to cooperate on key legislative issues – but who have done very little that could be considered progress. Instead, they give the dangerous impression that both parties share responsibility for congressional gridlock, while all too often taking positions that support the unjust status quo. As but one example, the Problem Solver Caucus has been called the “Child Abuse Caucus” for blocking a border funding bill that would have protected migrant children and taken away the ability of the immigration police to act with impunity. Bipartisan unity is a worthy goal if it actually leads to progress. Sadly but unsurprisingly, that has not been the case.

Melanie recognizes that while this country has too often failed to live up to its highest ideals, that is no reason to stop trying. She will work with anyone – as long as they share her commitment to making our communities a better place for all and not just for big business and the ultra-wealthy few.  If her platform speaks to you, please consider lending your support. Time is short and the odds are always against a challenger, ever more so in the midst of a global pandemic (and when the Democratic establishment is making it harder for progressive upstarts to win primaries).

COVID-19 has devastated our communities, but also given us the chance to reimagine what we want our future to look like. Do we go back to a time when the few benefited at the expense of the many, when we put profits over people? Do we continue to ignore the evils of rampant inequality and white supremacy, wish away the climate crisis and the next global pandemic, and devalue science and public health? Do we continue to give Democrats a pass for their contributions to four decades of destroying the collective safety net? Or do we fight with all we’ve got for a just future that works for everyone?

If we re-elect Tom Suozzi, we are voting for a return to how things used to be. We will be getting a cautious, corporate aligned politician who will do little to shake things up. But if we choose Melanie D’Arrigo, we are getting a fighter who recognizes our shared humanity and interconnectedness, and who will do everything she can to help create the world we want to see. To be a true leader, you cannot just call yourself a problem solver – you must act like one. We are living in a time when many problems seem insurmountable. Fortunately, Melanie D’Arrigo is up for the challenge. I am enthusiastically supporting her election in the Democratic primary on June 23, and hope you will too.

For more details about Melanie’s platform, or to ensure you can vote by mail, visit www.darrigo2020.com. 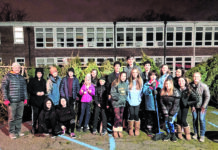