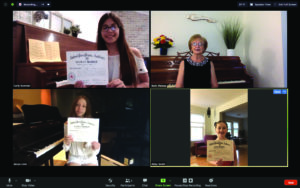 An outstanding and fun idea during this pandemic, became a reality—to hold a virtual student Piano recital. Ruth Pleines recently held her 40th annual student recital, in a virtual setting via zoom. After lessons ended abruptly in mid-March, it became clear that some finality was needed to conclude the semester of piano study. Two weeks before the virtual recital, the students all agreed to practice diligently and perform some of their favorite pieces.

The Port Washington students were excitedly surprised to see the appreciative audience of family and friends. Nearly 150 people appeared on zoom from around the Globe. Guests from England, many cities in Western Canada and all over the United States including people from Georgia, Florida, Texas, Pennsylvania, Virginia, New Jersey and many parts of New York watched the students perform
their pieces.

Closing remarks by Pleines included her appreciation for the students and parents for the cooperation required to make this recital possible. Special treats had been delivered to each home, so that at the conclusion of the evening, the family could celebrate together.