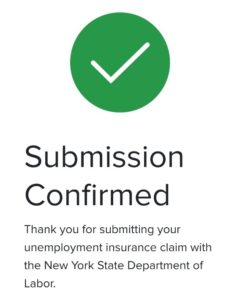 Before the start of the coronavirus pandemic, Heather Lehrman was making enough between her dog sitting business and side jobs as an actor to afford to live in Glen Cove in relative comfort. When work dried up in March, she became part of the first large wave of Long Islanders to file a claim for unemployment benefits with the New York State Department of Labor (DOL). Like everybody who has filed, she was told in early April a DOL representative would call her within 72 hours.

More than eight weeks later, Lehrman is still waiting for her call.

Going on two months with no assistance, Lehrman is eating cereal for most of her meals so she doesn’t waste money on food. Her waking hours are full of stress, and she’s finding it nearly impossible to sleep. She’s been burning through her retirement funds to keep from going under completely.

“I wake up every day thinking it’s a dream, like it never happened,” Lehrman said. “This isn’t real. It’s such little money, but it would just change my life. It’s nothing like what I was used to getting, but that’s what I’m begging for.”

Lehrman made a YouTube video documenting her experiences with a stalled out unemployment system that she has sent to every possible outlet she could think of—social media, news organizations, local politicians and even New York State Governor Andrew Cuomo—on a daily basis since May 3. So far, she’s only heard back from people in similar situations.

“This is a crisis that was not anticipated, and the state is doing what it can,” New York State Assemblyman Charles Lavine, whose office is just one of many being overwhelmed with calls from anguished constituents, said. “We are essentially constructing an airplane in the middle of the sky.”

At various times people filing for unemployment have heard the DOL make promises it hasn’t kept, dole out assistance in a way they find random and suggest after weeks of silence that applicants have filed their claims incorrectly. While the state tries to scrounge up money, aid and information, many on Long Island feel the lack of updates and disjointed messaging from the top is evidence the state isn’t aware of how desperate the situation is getting.

“People are already on edge from COVID-19 in general,” Syosset-based real estate agent Jordan Oringer said. “Then you add money problems onto it, especially if you have kids to feed or you’re trying to keep a roof over your head. People are going to explode soon. I don’t know what the state and the government expect people that are desperate to do. I don’t think that they understand the gravity of the situation, it’s hard to comprehend.”

With hours-long waits on the phone and months worth of unanswered claims growing more and more common, New Yorkers looking for information have banded together on Facebook groups like “HELP US—NYS Unemployment Issues.” In a brief scroll through the posts to the 40,000-member group, it isn’t uncommon to find desperate New Yorkers literally starving or thinking about ending their lives.

“People are so desperate,” Lehrman said. “I’m in a bad enough place of my own, but people are wanting to commit suicide at this point. Everyone’s getting the runaround and no one’s getting a dime.”

Even in less extreme cases, the dearth of money coming in still hurts.

“I’ve never had to go through anything like this, not even when we had the recession,” Nick Baierlein, a concrete worker who lives in Bethpage, said. “I just got back to work but I don’t work every day right now. I’m only missing a week of unemployment, but the truth is with my son in school I really could use it. I’m a little lucky, I can’t even imagine what others are going through right now.”

The DOL recently revamped its callback system to better deal with demand, and plans to hire an additional 1,200 workers to get back to people in a more speedy member. The DOL has, in spurts, begun sending out $600 apiece to certain applicants in the hopes of being reimbursed later, but Lavine said the state can only do so much without federal aid. Should a federal aid package fail to pass, Lavine said the situation in New York will only get more dire.

“Without federal financial assistance New York State is going to be bankrupted,” Lavine said. “Mitch McConnel doesn’t want to hear about this and the president wants to hear about it even less. There will be tremendous tragedy that will flow from the federal incompetence both in the White House and in the Senate.”