Many people these days have never seen a trolley car, but in the early 20th century trolleys provided a convenient way of getting around. Unlike trains, trolleys made frequent stops in local areas. Some historians credit the trolley car system with the growth of suburbs. The earliest trolley cars were pulled by horses along tracks. But horses were costly and cleaning up after them added to the expense. The introduction of electric power to move the trolley was more efficient and economical. Power was delivered to the cars from overhead copper wires supported by trolley poles 30 feet high. Trolleys ran on tracks embedded in streets used by wagons and later by early automobiles. The earliest electric trolley route was established in 1890 and ran from Huntington Village to Halesite. 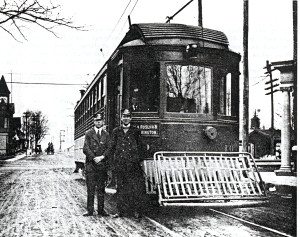 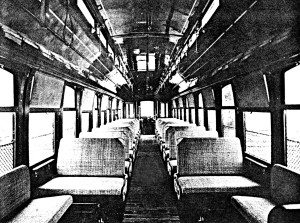 North Shore residents were eager to see this innovation on their streets. Four prominent Port Washington citizens whose names are familiar to many of us, namely Charles Hyde, Elbert Mackey, John Mitchell and A.C. Bayles, successfully petitioned the Nassau County Board of Supervisors to grant a franchise to the New York & North Shore Traction Company to build a trolley line, which would extend from Port Washington to Mineola. Construction began in May 1907, and thanks to the hardworking construction men who were paid $1.50 a day, the route was completed in early 1908. A gala opening day celebration took place on February 1, 1908, at the Cove Inn, a hotel on the corner of Main Street and Shore Road.

On the first day of full operation, Feb. 2, excited passengers boarded the trolley at the terminal near the Manhasset Bay Yacht Club for the ride to Roslyn, which took 25 minutes. After a wait at the Roslyn Clock Tower for a northbound trolley to pass, they continued to their final destination, 50 feet from the Mineola railroad station. Trolleys left Port on the hour and those from Roslyn on the half hour. In the early days there were no designated stops. Passengers flagged down cars as they came down the tracks. There were four fare divisions between Port and Mineola; each cost seven cents. The entire trip to Mineola, a distance of 9.69 miles, cost 28 cents. It was a popular Sunday outing for many families and church groups who brought their picnic baskets with them. One could connect to another branch from Mineola to Hicksville with the entire trip from Port, 16.46 miles, taking about one hour and twenty minutes. The cars were painted dark green with a light green interior, accommodating 48 passengers. Seats were rattan.

The popularity of trolleys began to wane during World War I when construction materials such as copper and steel became more expensive and maintenance workers were leaving for better-paying jobs in munition factories. But Port residents continued to ride trolleys, which were featured in popular cartoons created by cartoonist Fontaine Fox, who lived in Port on Carlton Avenue and had an office in the Hyde Building on Main Street. Mr. Fox’s cartoons featured amusing Toonerville folks who rode what he called “The Toonerville Trolley Which Met All the Trains.” His syndicated column, which ran from 1913 until 1955, appeared in more than 200 newspapers. One of his cartoon characters was a bully named Mickey McGuire, a part played on the screen multiple times by the legendary actor Mickey Rooney. Trolleys were also celebrated in Judy Garland’s hit movie Meet Me in St. Louis. Who remembers “The Trolley Song”? After the war automobile production increased, putting more cars on the road. Trolley companies were losing customers and income. A blizzard on Feb. 5, 1920, closed down all the operations of New York & North Shore Traction Company, which had extended from the city line at Little Neck to Hicksville plus the Roslyn to Port Washington branch. The headline in a local newspaper dated March 8, 1920, declared, “Trolley Company is Out of Business. February Storm Too Much For Struggling Line and Lack of Funds Forces It to Quit Operating”. It was the end of an era as a piece of history disappeared under falling snow.