“Qualifying for states felt fantastic, especially because as a relay we worked together as a team, and it felt like our hard work throughout the season paid off,” said Stevens. “We knew that our time wasn’t as good as some of the other teams running, but believed that we could run even faster, and that mindset carried us to another school record and 11th place at states.”

“The feeling was unimaginable,” said Zsikla. “Being able to be one of the best jumpers in the state is really such a blessing, and it’s rewarding to see that all of the hard work put in throughout the season paid off.”

“They all performed their best, improving on their own school record in the relay and jumping well,” said boys’ winter track coach Arnold Donado. “Throughout the season we knew we had a great opportunity to do well in the sprint relays and jumps. We worked hard on the track and in the weight room, focusing on the end of the season.”

“Overall I am proud of the way are girls worked this entire season and have been great role models for their teammates and the Port Washington community,” said girls winter track coach Jeremiah Pope. “All these girls train hard. They work out all the time. It’s hard in the winter, especially when the weather conditions may not be the best, and the girls never use this as an excuse.”

This year the team won their eighth conference title and their fourth indoor conference title, finished second in the county at the Nassau County championships and broke a school record. Bazzini broke Schreiber High School’s record for the indoor 600m with a record of 1:36. Additionally, Gellis, Bazzini, Hurt and Saige Gitlin qualified for the New Balance Indoor Nationals on March 10. 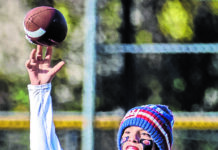