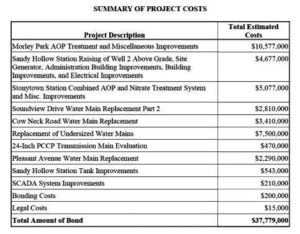 The Port Washington Water District (PWWD) appeared before the Town of North Hempstead (TONH) board during their Aug. 5 meeting for a public hearing regarding a bond issuance. The PWWD was seeking a bond in the amount of $37,799,000 for the increase and improvement of facilities within the water district.

Bill Merklin, the Senior Vice President of D&B Engineers and Architects, represented the PWWD and spoke to the board regarding the reasoning behind the cost of the bond.
“A lot of these projects are driven by some recent regulations that were implemented by the New York State Department of Health,” Merklin said. “They were implemented in August 2020 and they created maximum contaminant levels (MCLs) for three emerging contaminants, 1-4, dioxane, PFOA and PFOS. PFOA and PFOs are part of a larger group of contaminants known as PFAS—there’s thousands of them but they’ve regulated just these two. These regulations have impacted some of the Port Washington Water District’s supply wells at various concentrations. The district has started planning for that and has also implemented conservation requirements and made some operational changes in an effort to minimize the amount of water that’s pumped from the wells that are impacted by these contaminants. Many of the projects are driven by these contaminants but also some of them are just to replace aging infrastructure.”

“Ten projects are included in phase 2 of The Port Washington Water District’s capital improvement program,” Councilwoman Mariann Dalimonte explained in her June District 6 newsletter. “Each project has been identified as critical, based either on the need for emerging contaminants treatment or for general infrastructure improvement to maintain the system’s reliability. Many of the projects build upon projects which were initially identified in Phase 1 of the program in 2019. Projects in Phase 1 are finishing detailed design and heading into construction. The bond issue is necessary to allow for the construction phase to begin for certain projects and for the design and construction phases for other, new projects.”

The Water District was awarded $18,076,600 in NYS Water Infrastructure Improvement Act (WIIA) grant, which is being used for the projects that combat emerging contaminants. The district “has every intention of going after,” additional WIIA grants as they become available, Merklin stated. If the district is successful in securing additional grants or other funds, the total amount of the bond will be decreased accordingly.

Dalimonte asked the Water District board how they plan to inform the residents if they do receive additional grant money.

“We have several outlets to alert our customers,” Mindy Germain Commissioner of the PWWD, said. “We have an email portal that we are actually growing right now. We always notify our elected officials. We run press releases in the newspaper. We have some social media and we also do mailings. We have lots of tools in the tool box for public outreach.”

Dalimonte stressed the importance of making sure the community was made aware if any additional grant money is received.

“I do think that it’s very important if you do get additional grants that the community knows that you are fighting to reduce this bond,” Dalimonte said.

Merklin explained that the district is also engaged in lawsuits against the manufacturers of the chemicals contaminating the wells.

“If they are successful in these lawsuits, it would further reduce the amount of money that’s actually borrowed,” Merklin said. “Technically we’re requesting authorization to borrow this $37 million but if we can get money from a lawsuit we will actually borrow less.”

Merklin then went over the cost this bond could potentially have on the community.

“We included a table that shows approximately what this bond issue might cost a typical resident in the community,” Merklin said. “It’s based on your home value. This makes a bunch of assumptions. One is that the cost would be paid entirely through taxes—that decision has not been made yet. It’s possible that some portion of it could also be paid through water rates. It also assumes that a 20 year bond will be brought out and it makes an assumption with respect to the interest rate of that bond, which obviously you can’t predict. But for example, if you had a $500,000 home you’d be paying $356.09 a year for the 20 year life of the bond to pay for this.”

Supervisor Judi Bosworth thanked Merklin and the Water District’s board of commissioners for their presentation and for working hard on behalf of the community.

“Thank you Tal and the commissioners, I know how hard you’ve worked to put this together so that the community understands what these improvements are for,” Bosworth said. “The great effort to make sure that our drinking water stays safe—we all appreciate that.”

Dalimonte reiterated similar sentiments, thanking the district for being so communicative with the public and answering questions. The TONH board then unanimously voted to approve the bond.

The Town of North Hempstead Board will meet again on Thursday, Sept. 2 at 7 p.m. Livestream of the meeting is available online at northhempsteadny.gov/livestream. For more information, contact Superintendent Tal Vacchio of the Port Washington Water District at 516-767-0171 or info@pwwd.org. Beautyfluff Receives A Sign Grant From The Port Washington BID

Beautyfluff Receives A Sign Grant From The Port Washington BID