A lot of amazing events have occurred over at Oakcliff Sailing in Oyster Bay, but with the event that happened recently out east, amazing doesn’t even begin to describe it.
Oakcliff Sailing, led by Dawn Riley with the help of Bill Simon, a Port Washington resident, is an area team that have always done great things. But when they teamed up with Judy McLennan, the Clagett president and cofounder, for the first-ever match race event for adaptive sailors, it was pure magic. Eight teams from around the country and as far away as Puerto Rico arrived in Oyster Bay. Now that doesn’t sound too different, but this time it was for disabled racers who have never done match racing before. To get an idea of how new this type of racing was for these racers, Dave Perry, who led an onshore clinic on match racing with on-the-water coaching the day before, started the Skipper’s Meeting with a review of match racing’s starting sequence. Match racing starts can be over-the-top confusing for the newcomer. So when Perry reviewed the match racing start, it really hit home that not only were the teams new to match racing, but also how enthusiastic they were to try something new.

Eight skippers with disabilities, both visible and invisible (PSTD), registered to race. Some were missing an arm or leg, another skipper was blind and yet another who, because of a spinal injury, had to be hoisted into the boat. He steers the boat through a breathing tube attached to the boat’s rudder. Then there were some skippers whose disabilities aren’t visible but are challenged just as much. And they spent a weekend racing, not only a new boat, but in a totally different kind of racing from fleet or team racing.

Just getting the skippers into the boats was a bit of a challenge. Thanks to the Waterfront Center, which hosted the event, eight Sonars were adapted for disabled sailors; no small feat. It’s not like most of us who go down to the dock to get a launch to get to your boat’s mooring. These boats were outfitted days before and were waiting at the dock. At the conclusion of the Skipper’s Meeting, the parade of wheelchairs, others with canes and additional help, emerged from the Waterfront Center and headed to their respective boats. Some skippers required more help than others. Dave Whalen had to be hoisted into his boat with what is called a Hoyer Lift that has been designed for just this task. Once aboard, a breathing tube (not the actual name but that is what it looks like) was attached and the skipper started breathing through it to see if it turned the rudder properly. Depending on how the skipper breathed into the tube, the boat would turn either to starboard or port. After a few test breaths, the boat was ready for racing.

After struggling on land to get to the dock, and after spending a lot of time just getting into the boat and strapped in, the boats left the dock for the racecourse. The contrast between the difficulties facing the disabled on land totally disappeared once the boat got underway. There wasn’t a dry eye on the dock as we watched the sailors go out for a day on the water—doing just what every able-bodied sailor takes for granted. This is the true definition of freedom for these sailors.
How in the world can a blind person sail a boat? On each boat there is an able-bodied sailor who volunteers to race with the team. These are mostly friends who feel strongly that helping adaptive sailors get on the water is what they want to spend their time doing.
Here is a bit of history of the Clagett and how the work of many people led it to Oyster Bay and the match race.

The late C. Thomas Clagett came down with meningitis when he was young and was temporarily paralyzed. This gave Clagett a new respect for the accomplishments of the disabled. His daughter, Judy McLennan, is the president and cofounder of The Clagett, a nonprofit organization initiated in 2003. The vision is to become the leader in developing competitive sailing opportunities for sailors with disabilities. Their mission is to develop a program that will enable sailors with disabilities to reach their personal levels of achievement by providing venues and a process that includes inspirational information and educational instruction according to www.clagettregata.org.

Shifty winds challenged the teams and at one point racing was suspended because of lack of wind. Perry was out taking videos, and volunteers from SailAhead and Warrior Sailing Program provided on-the-water support. By the end of the day, the teams arrived back at The Waterfront Center for a Perry debrief and awards. An extraordinary day for extraordinary sailors. 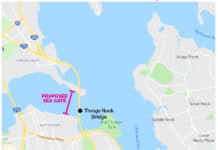 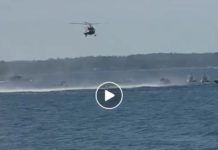 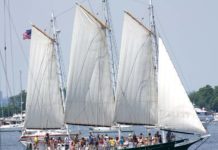