The jewel in the crown of the Nassau County Parks Department

When most of the world was frozen in place by COVID-19 and all that came with it, the Sands Point Preserve was in a unique position to pivot while proving to be a refuge for people seeking a respite from the pandemic. Situated on 216 acres, the Preserve’s huge expanse provided a place for visitors to safely social distance and hit the metaphysical reset button in a way that temporarily banished the emotional heft of the coronavirus, enforced mask-wearing notwithstanding. The estate’s role as an inadvertent outdoor oasis was one it was uniquely suited to play according to Executive Director Beth Horn.

“The Preserve got through the pandemic for two reasons.” Horn said. “We took all our normally onsite educational and wellness programs and took them virtual from the very beginning of the pandemic. Immediately, we had all the registrants that were ready to come to the Preserve before the pandemic ready to transition into the online programs. We kept our registration up because there was no break—we pivoted instantly. That was the very early part. The second reason we did so well getting through the pandemic was that we focused all of our programs and promotions on the outdoors because the Preserve was one of the few places that was a public park where people could go almost whenever they wanted. The place is so big that it was easy to social distance. People could come out, relax on the grounds and feel safe. What we found was a record number of daily visitors and memberships went way up.” 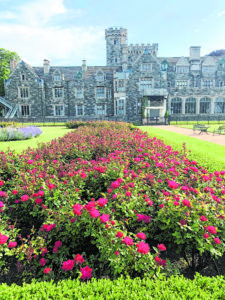 Pre-pandemic, a normal day’s attendance would be 400 to 500 cars on a summer day on a Saturday or Sunday with 400 cars equating to 700 to 800 people. During the COVID-19 lockdown, Horn estimated that number doubled with roughly 50,000 people coming out to explore the grounds during that time.

“People would say once you get out of your car and you are away from the parking lot and disperse around the grounds, you never feel like you’re in a crowd,” Horn said. “It doesn’t feel at all crowded and that’s a really nice feature of the Preserve.”

With a $2 million annual budget driving the Preserve, visitor admission and membership fees became the lifeblood for Sands Point, particularly given the fact that normal revenue generators such as television and movie shoots, weddings, fundraisers and private events were either completely suspended or reduced to the point of not being nearly close to what Sands Point needs to keep operating.

“We had so many visitors and were so happy, whether they came for the day or became members,” Horn said. “That really more than compensated [for lost revenue]. We are extremely appreciative of all the people that came out and turned to the Preserve during such a difficult time.”

Taking A Walk Through The Past
With it unique positioning as both a museum and nature preserve, visitors have plenty to indulge in whether tastes run to learning more about history of the Gilded Age, the Gold Coast and Gatsby Era robber barons like the Goulds and Guggenheims or just to commune with the great outdoors. The two dominant buildings at Sands Point are Castle Gould, 100,00-square-foot medieval castle modeled after Ireland’s Kilkenny Castle that was completed in 1902 by financier Jay Gould as an offering to his bride, actress Katherine Clemmons. When she failed to be impressed by Gould’s efforts, he doubled down and constructed Hempstead House, a nearby 50,000-square-foot Tudor-style mansion with a 60-foot-tall entry foyer. While the Gould-Clemmons union ended in divorce, the buildings continue to enchant and inspire awe via the extensive craftsmanship on display. When mining tycoon Daniel Guggenheim purchased the estate from Gould in 1917, he gifted 90 acres of property to son Daniel, who constructed a French-Norman manor house on the bluffs overlooking the Long Island Sound. The younger Guggenheim dubbed it Falais, which means “cliff” in French. When father Daniel passed away in 1930, the younger

Guggenheim’s mother Florence built and relocated to Mille Fleurs, a smaller mansion on the property that included a garden of “a thousand flowers.” By 1971, Nassau County acquired 127 acres for public recreational use while the recent death of Harry Guggenheim that same year saw the late philanthropist deeding his 90-acre estate, including the fully furnished Falaise mansion, to the county for use as a museum site. In 2003, the nonprofit Friends of the Sands Point Preserve was formed (it was later renamed the Sands Point Preserve Conservancy, Inc. in 2016).

For Horn, who called nearby Port Washington home for 20 years and knew of the Preserve when she took the position of executive director in 2016, she was immediately impressed by the expanse and potential it had to attract more visitors.

“One of the biggest surprises I discovered when I started working here and one of the things I really enjoy is that the spaces allow for really interesting programming,” she said. “We started doing outdoor concerts, murder mysteries inside of Hempstead House along with all kinds of music performances and dance. We could also start to do all kinds of cultural programming. That was marvelous and is something we’re getting back to. I also discovered that there is a community that is not only Sands Point. It is the region really coming out for those different cultural programs. So that was a nice meeting of the programming and the audience.”

Communing With Nature
The Sands Point Preserve’s outdoor bona fides are numerous given myriad outdoor environments it contains from the lush woods and beach that looks out on the Sound to the great open lawn, pond and rose garden. Visitors can partake in a number of outdoor activities including nature walks (more thematic), wilderness adventures (monthly excursions with Ranger Eric and biologist Aaron Powers), nature baths (a meditative wellness walk), bird-watching tours and plenty of yoga. There are also self-guided tours complete with downloadable maps and available in English, Spanish, French, Italian, Japanese, Chinese, Russian and Korean. It all adds up to what Horn feels is a very special place to visit on the North Shore.

“The Sands Point Preserve is a unique combination of a Gatsby Era historic estate and a nature preserve,” she said. “You can experience the cultural history that is the Gold Coast—those early industrialist families that made massive fortunes while they were creating the economy of the United States. And/or, you can venture across 216 acres and go through woods, around a pond, go down to a beach, a great open lawn and experience all these distinct and beautiful environments. It has many environments—not just one or two. It’s really both. Depending on what you feel like doing, you really can experience quite a lot.”

Visit www.sandspointconservancy.org to learn more about the Sands Point Preserve.