The Port Washington Public Library (PWPL) presents its exhibit “Hope Through the Eyes of an Immigrant” this July. The exhibit consists of several essays discussing different hopes surrounding immigration: personal, familial, communal, and global hopes. Each piece was written by the PWPL’s English For Speakers of Other Languages (ESOL) students.
The library’s ESOL program was started by the current ESOL coordinator, Peggy O’Hanlon, in 1993. At the time of its creation, the program had just five tutors and a handful of students. Since its creation, O’Hanlon and the tutors developed a much larger program, and there are now upwards of 40 tutors that work with approximately 200 students. 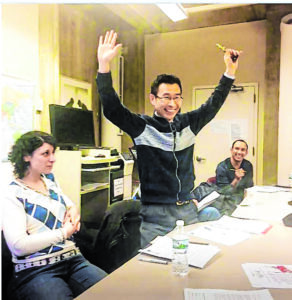 A wide range of students and skill levels are taught in the program, and while there are children enrolled, the program primarily consists of adults aged 18-80. With the program’s growth in number, it has also grown its variety of classes; there are now over 35 classes offered throughout the week.
“The program evolved into more than just English language, so we have citizenship preparation and GED [programs], writing classes at all levels,” said O’Hanlon.
Alongside these additional classes, the program also offers pronunciation training, conversation classes and homework help for students.
“We really have some wonderful tutors…that’s what made the program grow,” said O’Hanlon.
With the dedication and compassion of all involved, the ESOL program and its work for the community have developed into something much greater than anticipated.
“Hope Through the Eyes of an Immigrant” began as a writing project for ESOL students. The project was intended to serve as a competition with winners from different class levels who received a prize funded by the Friends of the Library.
O’Hanlon worked alongside Sonia Arora, a teaching artist, writer and former teacher. The pair had previously collaborated on other projects and both were inspired to create an exhibit on the topic of immigration with the classes.
“I applied for a grant to do this program because there was a lot of anti-immigrant sentiment, and I wanted our town to see the stories behind the faces–the people that you go to the grocery store with, that are our neighbors–to give [our town] a sense of who they are,” said Arora.
This exhibit was created to hope that community members could learn about the immigration stories within the community and about stories from around the world.
“The library [and] our town [have] such a diverse community,” said Arora, “It’s amazing. It’s like a slice of the world that you get at the library.”
The exhibition hopes to allow the library’s patrons to learn about the diversity in their town and read their peers’ narratives.
“I love the stories that come out [and] all the various journeys. And not just the physical journey but the metaphorical journey that we all take in our lives. [O’Hanlon] and I wanted to figure out a way to replicate that,” said Arora.
In the light of the COVID-19 pandemic, hope is something that many people have learned to lean on throughout hardships. For immigrants and non-native English speakers, the pandemic and its hardships were all the more daunting. The exhibition explores how we hold on to hope throughout the difficulties that we face.
Within the ESOL program, the idea of writing in one’s second language can be intimidating. To curb this anxiety, Arora visited the writing classes to give them conversational prompts to organize their writing.
“Because I was a high school English teacher and I still go into classrooms, I know that this [fear] is not something that just the ESOL class harbors,” said Arora. “So many people are afraid of writing.”
These conversational prompts introduced the idea of hopes and allowed students of all skill levels to write without fear or intimidation.
In the students’ essays, numerous themes emerged, including peace, hope and health. Alongside personal hopes, there were also a number of long-lasting hopes that would continue to impact future generations.
“Medical staff was short. Some patients got infected and could not see their relatives.
They could not hug them before they died. I hope the pandemic will end soon and people around the world will return to normal life,” one student wrote.
“My hope for my community is that it stays in peace and harmony. My hope for homeless people is that they find shelter. My hope is that rich people give food to poor people instead of wasting it. May this world be beautiful,” another said.
With the exhibition of these essays, the ESOL program hopes that people in the Port Washington community feel closer to their peers and respect the journeys and stories of immigrants. Within these pieces, there is a great sense of diversity and richness in the writing. “Hope Through the Eyes of an Immigrant” will be displayed on the second floor Community Gallery through the month of July.