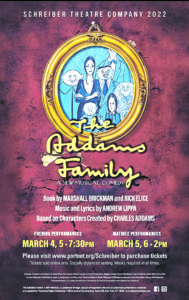 The student production assistants were Talia Sinclair and Ben Gordon.
For information on purchasing tickets please visit the Schreiber webpage at www.portnet.org.
Be sure to follow Schreiber Theatre Company on Facebook and Instagram for the most up to date ticket and show information.
—Submitted by the Port Washington School District