At this year’s Memorial Day Parade in Port Washington, two grand marshals will be honored. Jerald H. Tedeschi is the Veterans of Foreign Wars (VFW) grand marshal. Leon Jankowski is the grand marshal from the American Legion.

The Memorial Day Parade will begin at 10 a.m. on Port Washington Boulevard and Campus Drive and end on Lower Main Street near Sunset Park. 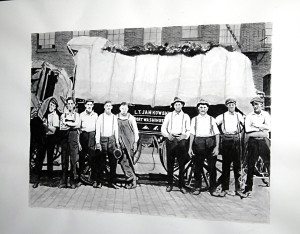 Tedeschi enlisted in the Army in January 1969 while in graduate school after graduating from St. John’s University. He served 10 months stateside at Fort Dix, NJ, Fort Leonard Wood, MI, and Fort Belvoir, VA. After completing his combat engineer training in the states, he was deployed to Vietnam for one year. Tedeschi was stationed at Quang Tri Combat Base, I Corps, which was located seven miles south of the demilitarized zone. After arriving in Vietnam in November 1969, Tedeschi was assigned to A Company, Seventh Engineer Battalion, First Division, Fifth Mechanized Infantry Division. Tedeschi’s initial duties in Vietnam included working in the bridge platoon, assisting in the construction of a command bunker for the commanding general of the division and maintenance of pontoons on a heavy duty float that would be used in the event the Quang Tri River Bridge was destroyed by the North Vietnamese Army or Vietcong. After six months, Tedeschi was reassigned to the communication section of headquarter platoon as a radio transmitter operator, and eventually was appointed communications chief and promoted to Sergeant (E-5). As communication chief, Tedeschi was responsible for the installation of radio equipment in vehicles. He supervised a technician and transmitter operators.

After leaving Vietnam, Tedeschi was in the Army Reserves for four years. While working full-time, he completed two master’s degrees: a biology degree from CW Post and a hospital administration degree from Rensselaer Polytechnic Institute.

After military service, Tedeschi married a Port Washington School District music teacher and band director, Deborah (Tanza) Tedeschi. They have two sons, a daughter-in-law and one grandchild. Tedeschi is retired and enjoys boating and traveling. He is chairman of the Port Washington Henderson-Marino Post 1819 house committee and dedicates many hours to overseeing the refurbishing and maintenance of the VFW Post headquarters and grounds.

Leon Jankowski is a lifelong resident of Port Washington. His grandfather operated a farm opposite Nassau Knolls Cemetery in the early 1900s. He graduated from Rensselaer Polytechnic Institute with a degree in civil engineering.

He served in the Army as First Lieutenant during the Vietnam War era, stationed at Fort Hood, TX, with the Second Armor Division Artillery. Jankowski completed Airborne Training with the 82nd Airborne Unit at Fort Benning, GA.

Jankowski is a past exalted ruler of the New Hyde Park–North Shore Elk Lodge and has served as district deputy for the Southeast District, which covers Nassau County, Manhattan and Staten Island. He is a trustee for the Lodge. He is also a member of the American Legion, working with the officers for the benefit of servicemen and veterans. This involvement has been ongoing for a number of years and continues today.

“My involvement with CancerCare includes a variety of work including support for the Red Stocking Revue fundraiser and other efforts,” said Jankowski. “As a longstanding member of the Sons of Italy, I look forward to continuing my work and enjoying the camaraderie for a long time to come. As you know, we have a multi-day annual feast at Hempstead Harbor Park.”

Additionally, he is serving as president of the Polish American Cultural Association, involved with organizing all events, including local elections.

“I am proud and honored to lead this year’s Memorial Day Parade and to honor those who made the ultimate sacrifice for this great nation. God bless America,” said Jankowski.