Hot Dogs are a summer necessity, so Manorhaven Market is grilling up Snap Dogs for customers to chow down on while they shop around, kicking off summer with the addition of Port Washington resident Keith Dorman’s original take on the classic summer dish. Former owner of Harbor Q Barbeque Bistro on Old Shore Road decided to elevate the hot dog eating experience by creating a higher quality hot dog that was branded with its name and the word “beef” to let consumers know what they were eating. 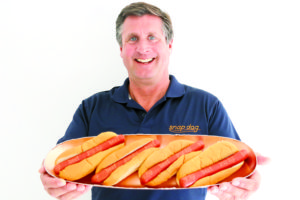 “Like most BBQ restaurants you had to have a kids menu and I had a hot dog on the menu,” said Dorman, explaining how he came up with the idea for Snap Dog. “We had a popular brand and to me it was always very mediocre. There was nothing very special about it. So when I was thinking about expanding my BBQ business I looked at restaurant industry and saw how many times the burger had been made over. Instead of McDonalds now people are going to Smashburger or Shake Shack. They filled the fast casual niche in the industry. I wondered where the hot dog had been.”
After deciding to fill the fast casual niche in the hot dog industry, Dorman rented a hot dog cart and sold his premium beef hot dogs on 55th and Broadway for a month, but Dorman soon realized that consumers have no idea what kind of hot dog they are being served. To make sure his customers knew what kind of hot dog they were paying for, Dorman found a company that makes a special casing that allows for graphics to appear on the side of the hot dog.
“No one in America has ever sold a hot dog with a brand name on the side of them,” said Dorman. “It’s kind of like a tan line. It’s an all natural process. There are no dyes used. As the hot dog sits in smoker, where the graphic is, there is less penetration through the casing in particular areas so there is a lighter shade and the graphics appear.”
The hot dog with its name on it seems to have gotten rave reviews as they have been purchased over 20 hot dog carts all over New York City. Dorman’s business is quickly expanding throughout the country with five carts in Nashville, TN, two carts in Irvine, CA, a deli in Sarasota FL, carts in New Jersey, Pennsylvania, Washington, Michigan, Rhode Island, and Nebraska.
“Social media has been one of our greatest marketing tools,” said Dorman. “We had the snap dog commercial that ran 2,200 times in NY area. We somehow got onto Direct TV during a Yankees game and got interest from all over the country.”
While Snap Dog is quickly becoming the hot dog to eat all over the country, Dorman thought it would be a great idea to bring his creation to his hometown of Port Washington.
“We just started in port Washington a few weeks ago at the Manorhaven Market,” said Dorman. “I noticed they have a table right next to the cashier. They had tried to sell Chinese food, but it didn’t take. Ideally I wanted to focus on the carts, but then we got a deli to carry it so I figured the market could carry it. We did a giveaway for Father’s Day and apparently that’s been a big success for the market because people are buying them on a regular basis.”
The Manorhaven Market currently sells the regular Snap Dog for $2.75 and the spicy jumbo Snap Dog for $3.75, but Dorman has plans to expand his hot dog flavors as he hopes to add a cheddar jalapeño dog and a bratwurst around OktoberFest. Manorhaven Market also sells a six pack of Snap Dogs in their natural casing in the freezer food section.
“It’s such a rewarding feeling when I drive by the market and I see the umbrellas outside,” said Dorman. “It puts a smile on my face each time. The beautiful thing is that they’re open seven days a week and year round. To have them as an established place for snap dog, if someone wants one in winter, they can have it. To see this thing progress has been a phenomenal experience.”