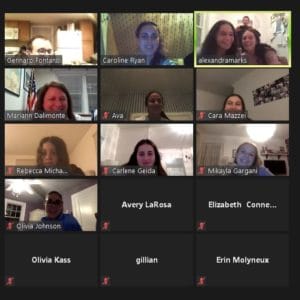 Town of North Hempstead Councilwoman Mariann Dalimonte recently spoke to students from Schreiber High School’s Student Advocacy Club during their most recent meeting. The club is comprised mostly of juniors and seniors and their mission is to enlighten and encourage students to advocate for important topics that affect the world and their local community.

The students held their first meeting in person in March, where they voted on topics that were important to them to discuss at future meetings. After COVID hit, the club continued their meetings, discussing a variety of topics including the Black Lives Matter Movement, pros and cons of police reform and advocating for stricter legislation to protect internet and social media privacy.

“The intention of the club is to do things like help [the students] get more engaged, so whether that’s by helping them contact their local representatives, letter writing campaigns, social media campaigns—basically ‘how do we express our political voices when we’re still at an age when we can’t vote yet?’” club moderator, Gennaro Fontana said.

During the meeting, the students had the opportunity to ask Dalimonte questions about her job at the town and how she got involved in local government.

“I truly love Port Washington and all the things that Port has to offer,” Dalimonte said. “I really wanted to be a voice for the community.”

Dalimonte explained how she felt that there needed to be more communication and knowledge about what was going on in the area. When she got into office one of her main goals was to be as transparent as possible. She helped to create the Town of North Hempstead District 6 newsletter, which sends residents email blasts about important topics, meetings and information about the community.

Dalimonte also spoke about how COVID has impacted her role as a newly elected councilwoman.

“I just started in January, so I basically had two months in the office before we shut down,” Dalimonte said. “It was really hard. I’m learning, here I was new and a pandemic hits and it’s not anything that any of these elected officials have ever went through.”

Dalimonte spoke to the students about the various committees that the town set up to help local businesses stay open this year. Town initiatives like Port Outdoors, as well as various virtual events have helped business owners transition from in person events to virtual.

“Instead of doing things in person and going to the schools and reading a book, or going to the senior center, we’re trying to do as much as we can for our residents through Zoom, through our TV channel (NHTV), through the radio,” Dalimonte said. “We have changed the way we would do things in person to doing them virtually and we’ve been getting some really great feedback. We’re trying to think of different ways to keep the Town of North Hempstead together.”

One of the students asked Dalimonte what some of the issues were that effect residents in Port Washington. Dalimonte spoke about a number of important topics that she has dealt with over the past year, including changes to the Business Waterfront district zoning code, the lawsuit with ExteNet and the town.

One major message Dalimonte stressed to the students was to spread the word about shopping at local businesses in the Port Washington community since many small businesses are really struggling during this time.

“When you’re driving down your street and you seeing all those Amazon boxes, just think ‘always try Port Washington first,’” Dalimonte said. “When you’re buying your stuff online, nothing is going back to the community. It’s really important that we shop local and we really support our local merchants now more than ever. I think right now our local merchants are hanging on because we had the summer. But right now because the winter is coming, I think it’s going to be the real test if [they are] going to survive. Right now is going to be the toughest time because it’s cold and people may not want to go out.”

The student advocacy club plans to continue discussing important topics such as advocating for gun legislation reform, environmental awareness as well as educational topics, such as standardized testing.