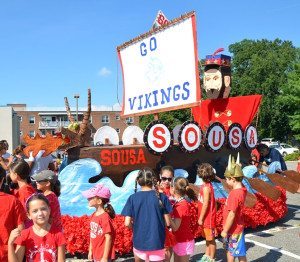 An estimated 80 Sousa students and parents worked together this summer to build the school’s new float in time for the annual Pride in Port parade.

Parent Mat Lanfant has spearheaded the building of the Sousa float each year. A year ago, the famous John Philip Sousa puppet, crafted by art teacher Stephen Moore, was perched on a giant sousaphone. This year, the beloved American composer’s puppet was at the helm of a Viking ship to show support for the Vikings football team. More than 200 Sousa students and parents proudly marched with the float, which spanned 18 feet long, 11 feet wide, and 14 feet high. Here’s hoping other schools will build one next year, too.