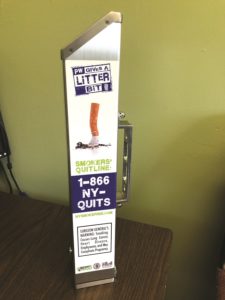 Part two of a continuing series

Sixty-five percent of all cigarette butts are littered and 38 percent of all roadway litter is made up of tobacco products, according to Keep America Beautiful.

So, Residents Forward joined with TerraCycle, the world’s leader in the collection and repurposing of complex waste streams, to collect and recycle cigarette butts throughout Main Street.

The cigarette recycling pilot is the newest initiative of the “Give a Litter Bit” campaign, and engages both the Town of North Hempstead and the Greater Port Washington Business Improvement District (BID). Residents Forward funded the purchase of six cigarette butt receptacles that were placed near the LIRR, Town of North Hempstead officials have agreed to hang them throughout Port and the BID will work with Spectrum Designs to empty the receptacles.

The collected cigarette butts will then be shipped to TerraCycle for recycling.

“We hope the Litter Bit cigarette recycling pilot spreads awareness that cigarette butts are litter too,” said Betsy Liegey, executive vice president of Residents Forward. “By working together, we can make it easier to keep our downtown clean and protect our bay.”
“Cigarette butts strewn on our sidewalks detract from the inviting shopping and strolling experience our local businesses count on,” said Mariann Dalimonte, executive director of the BID. “We are proud to sponsor the emptying of these receptacles along with other programs to keep our streets clean, including our Keep Port Clean team that operates April through October.” 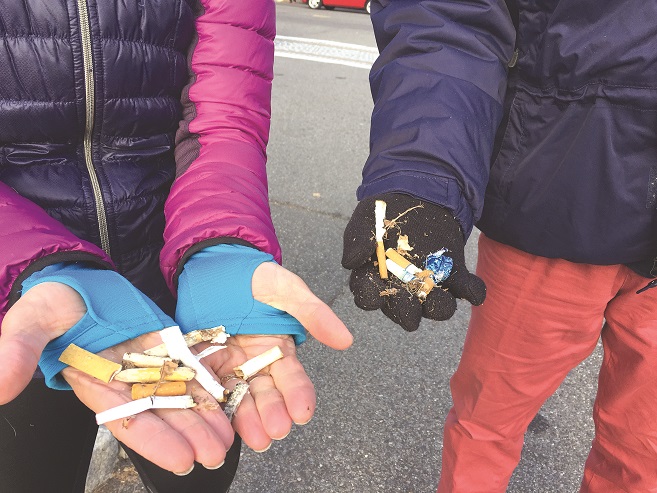 But how are these cigarettes recycled?

Once the cigarette butts are collected and shipped to TerraCycle, the butts are aggregated and stored in a local warehouse where they are prepared for processing. The residual tobacco and paper are separated out and composted while the filter, which is made of a white synthetic fiber called cellulose acetate, is thoroughly cleaned, melted and pelletized using a method called extrusion. The pellets are then combined with other plastics such as polyethylene or polypropylene and used for new plastic products such as ashtrays, shipping pallets or plastic lumber.

Once the receptacles are in place, TerraCycle Strategic Partnership Manager Brian Hanck explained that studies have shown an almost immediate 9 percent drop in the general vicinity and, over time, about a 50 percent reduction in cigarette butt litter. However, he explained, these numbers are tied to how many people are smoking in the area and the volume at which they smoke.

“Most of the time, smokers don’t have a location to put their cigarette butts in,” said Hanck. “And smokers are mindful of where they put them. They don’t want it to catch fire in the garbage. It’s best to educate smokers on proper disposal rather than litter.”

Hanck said the best way to ensure the greatest reduction is when receptacles are placed at almost every transition point, which are points in which the smoker may pause, which include outside of restaurants or bars, at street corners, bus stops and parking garages.

While the pilot program will last a year, Executive Director of Residents Forward Mindy Germain said, “Our goal is to expand. We use data from our clean ups to identify problem areas. As we expand, we will continue to place receptacles in these problem areas.”

Hanck explained it’s important for areas like Port Washington to implement the cigarette butt receptacles because the hamlet sits on the water.

“The town is always looking for new initiatives to protect our bay and safeguard our drinking water,” said Town of North Hempstead Supervisor Judi Bosworth. “With the help of our volunteers, TerraCycle’s cigarette recycling program can help keep our streets clean while preserving the habitats of local wildlife.”