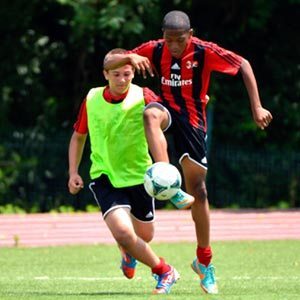 The Long Island players were scouted by A.C. Milan during their participation in ISTEP’s Milan Junior Camp this past June. Eight of the camp’s 100 participants were invited to attend this international tournament. Five of those invited are attending, including Luca Lewis of Port Washington and Shawn Chacko of Manhasset.

In Colombia, the players will exchange experiences and stories while participating in cultural activities and training

sessions with their Milan coaches. The week culminates in the Copa Americana, a three-day soccer tournament, where the Milan International Milan Junior Elite and Milan Junior Camp teams will be challenged by the creative playing style of the South American teams.

During their stay in South America the players will be scouted by A.C. Milan and may be invited to participate in the Junior Milan Elite Program, a no pay to play program and the next step in the professional soccer recruiting process.

ISTEP is a Long Island Soccer academy whose mission is to identify youth players who have passion, potential and respect for the game of soccer and expose them to multi-level training programs that culminate in an international cultural experience of a lifetime. ISTEP will host more Milan Junior Camps next summer on Long Island and participants will again have the chance to be invited to participate in international events.