On the evening of Friday, Nov. 6, the Port Washington Public Library hosted a preview of Shining Studio’s new production of 13. The coming-of-age musical features the buoyant music and lyrics by Jason Robert Brown and is based on a witty book by Dan Elish and Robert Horn. Under the proficient direction of Kyle Savage, 21 teenagers from Port and surrounding towns put on a spectacular performance which showcased their immense talent. 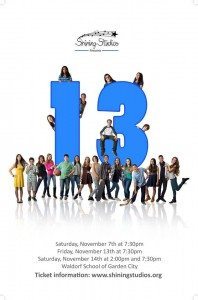 “These kids have gone beyond rising to the occasion,” said Production Manager Diana Von Roeschlaub. “It’s been amazing to see the level of dedication and of enthusiasm and just self-discipline.”

13 tells the story of Evan Goldman, who moves from New York City to Indiana at the most inopportune time—weeks before his bar mitzvah. Faced with many challenges, he adjusts to his new life with humor and song. Evan is played by 12-year-old Ian Miller, a student at Weber. He is no stranger to the stage, having performed in several musicals through camp and school, including Mame, Annie and Legally Blonde.

Dylan Schor, 12-year-old Weber student, plays Archie, one of Evan’s new friends in Indiana. Schor began acting when he was 7 years old at camp. He was not initially drawn to theatre, but when he saw other kids joining the play, he decided to give it a chance. “I was actually the only one of my friends who didn’t quit and I just loved it,” Schor said.

Also a seasoned performer, 16-year old Schreiber student Julia Hayden plays Patrice, Evan’s new neighbor, friend and love interest. “I’ve been doing theatre since as far back as I can remember,” Hayden said. She saw 13 on Broadway during its 2008-09 run. “Ever since I saw it, I knew I wanted to play this part.”

Westbury resident Tatiana Valdes, a newcomer to the stage, plays Kendra, a popular girl at school. Valdes said, “I met Kyle and he said I should audition for a play at Shining Studios.” She was thrilled to have gotten a lead part.

Jordan Krainin, 13-year old Weber student, plays Eddie. He had seen 13 on Broadway and when he saw on Instagram that Shining Studios was doing a production, he auditioned.

Schreiber student Dylan Forman plays Brett, the popular guy at school with girl troubles. He and several cast members were in Legally Blonde last year at Weber. “We were pretty tight-knit from that,” he said.

Sarabeth Schiff is a Schreiber student who plays Charlotte, “Everything Charlotte says is a lie,” Schiff said, quoting lyrics to a song in the second half of the musical.

“This group’s exceptional,” said Von Roeschlaub. “The talent is there, which is easy to see, but behind the scenes, they are equally amazing.” The cast displayed a level of professionalism on par with their aspirations.

“They impressed us all so much at auditions…[Kyle and I] came to the easy conclusion that we had to double the cast,” said Von Roeschlaub. “It wasn’t what we had intended doing going into it, but the level of talent was so high, it almost left us no alternative.” Members of the ensemble exchange places with the other characters so everyone gets their moment to shine.

Rehearsals for 13 took place about three times a week over the past six weeks. “I can definitely say I became friends with everybody in the cast,” Hayden said. “It’s a great experience.”

A surprise guest came to the debut—Ricky Schweitzer, friend of Musical Director Jake Glickman, who played Evan in the play in Los Angeles. Much to their delight, he talked to the kids before the show, answered questions and signed autographs.

After the show, Savage thanked the cast, crew, parents, volunteers, community sponsors and all in attendance for their support. “This is the most amazing production team,” Savage said. “I am so happy everyone is here working together and this is just the beginning. We’re just getting started.”

Shining Studios is a theatre school and community theatre in Port Washington, with an additional location in Suffolk County, that provides education to students of all ages. Their wide variety of classes, private instruction and several performances throughout the year provide aspiring students and performers with instruction in theatre, music and dance, empowerment to develop their craft, express themselves creatively and grow as artists.

One of the classes Shining Studios offers for 8- to 12-year-olds culminates in a performance. Look for the children’s production of Mary Poppins, also featuring Dylan Schor, in January 2016. Shining Studios also offers an outreach program which brings arts education programs to local schools and organizations.

The cast and crew invite the community to come out and see the show, complete with an orchestra, including musician Glenn Fleischman, owner of Bach to Rock in Port Washington. “It all came together beautifully,” Von Roeschlaub said. “You’re just gonna love it.”