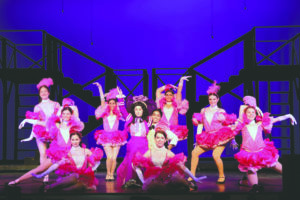 Students at Schreiber High School recently performed a sold out show of their latest theater production Newsies. More than 100 students and staff were involved in the production of the play and worked hard throughout the semester to put the show together. They performed two preview performances during school for the Schreiber students as well as four full length performances to sold out crowds of family and community members from Port Washington.

Based on the 1992 motion picture and inspired by a true story, Newsies tells the story of the plucky and impoverished boys and girls who sold newspapers for the major publishers of New York City at the turn of the century. When greedy newspaper magnate Joseph Pulitzer unfairly raises their distribution prices, charismatic leader Jack Kelly leads them on strike with the help of earnest newsboy Davey Jacobs and tenacious reporter Katherine Plumber. Newsies features a Tony Award-winning score by Alan Menken and Jack Feldman, and is based on a book by Tony Award winner Harvey Fierstein. The show received two Tony Awards including best choreography and best original score for its premiere on Broadway in 2012. The sold-out student production was filled with rousing music, electrifying dancing and an inspirational story of justice and determination.

The production team for Newsies was led by director Lauren Foster-Holzer, with vocal music direction by Carl Clancy and Amanda Johnson, choreography by Floryn Glass Stock and Jessica Wontropski, and orchestra direction by Anthony Pinelli, Jr. 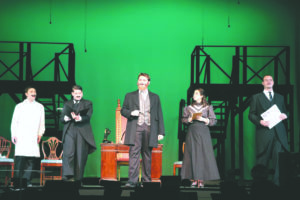 The play was produced by Christine Nelson, set design and construction is by Helen Albertson, Richie Albertson and Greg Weisburd, and props are by Leah Siskin and Jessica Griffin. Costume assistance was provided by Beth Weisburd and Deborah Abramson Brooks.

SWith more than 60 cast members and more than 30 students playing in the orchestra and running the backstage and technical crew, this production is truly bringing Schreiber High School’s community together. 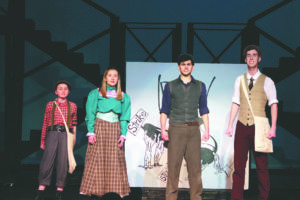 “This production was a huge success thanks to the incredible efforts of the students and staff,” director Lauren Foster-Holzer said. “The unrelenting work ethic demonstrated by the cast, crew and pit orchestra brought this amazing true story of the Newsies of New York to life. The dedication of the production staff and the support of the parents and families of our students helped create a truly memorable experience for all involved. Special thanks to HEARTS for their continued support of all the arts programs in Port Washington.”