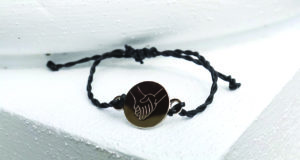 The death of George Floyd earlier this year caused protests, riots and looting in New York City, Chicago and other major cities across the country. Schreiber High School seniors, Aphrodite Dimopoulos and Ellen Efkarpidis, decided to make a difference in their own community. The two girls came up with the idea to create their own bracelets and donate the profits to causes which help to create change across the country.

LERA bracelets, which stands for Learn, Educate, Respond and Act, were created in support of the Black Lives Matter movement.

“The bracelets were invented to create unity within our community with hopes to unify the country, as we feel a partial split,” their mission states.

One-hundred percent of the profits earned from the bracelets will be distributed between different nonprofit organizations. After researching more than 50 different organizations Dimopoulos and Efkarpidis narrowed their choices down to three. Ultimately they chose to split their profits between The Innocence Project, Campaign Zero and The National Police Accountability Project.

“We wanted to make sure the organizations we chose were credible, sensible and made a significant contribution to the movement,” Dimopoulos said.

“We want to help Campaign Zero, The Innocence Project and the National Police Accountability Project achieve their goals in reforming the criminal justice system and police departments,” Efkarpidis said. “Second, we want the bracelets to encourage the wearers to confront their own internal biases and make steps towards becoming actively anti-racist. The combination of streamlining donation money towards important organizations and using a physical object to serve a deeper meaning is something that we feel can be extremely beneficial.” .

The girls hope that the bracelets will serve as a reminder to continue fighting for the Black Lives Matter movement.

“For those wearing the bracelet it has become a subtle and constant reminder of empathy and compassion towards others, with luck that will continue to grow,” Efkarpidis said. “We also hope the bracelets sparks productive and positive conversations about important issues of what it means to support one another.”

These strong-minded individuals don’t plan to stop at just bracelets. They plan on using their platform to support other equally important organizations through the coming years.

“We would like to be able to continue to raise money for organizations who are making a difference,” the girls stated. “In the future, we are considering donating to the Yemen or Lebanon relief foundations or LGBTQ+ organizations.”

LERA bracelets are sold for $7.50 each and are available for purchase at www.lerabracelets.com. More information about their history, foundation and mission can be found on their site.

Travis Fortounas is a contributing writer for Anton Media Group