The Vikings varsity softball team finished the season with a fantastic 14-4 overall record, where they were 9-3 in conference matchups during the regular season. Getting to the postseason was a tough task as they were tied for first place with Mepham, Farmingdale and Baldwin due to tiebreakers and finishing with identical records. The solution to determine their postseason aspirations was playing in a double elimination tournament to punch their tickets on May 10 and 11.

Although they would drop the first game to Mepham 3-2, the Vikings would rebound with a commanding second game against Baldwin 11-2 where they would seal the deal along with a conference championship. 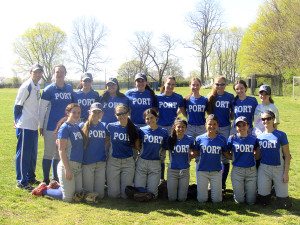 The Vikings would play in the first round as the eleventh seed and bow out to the sixth seed Syosset Braves 6-2 on May 12. Despite losing in the first round, Sutz was proud of the productive year his team had while playing in a competitive conference.

“When you look at it as a whole, we talked about being ranked fifth in preseason in our conference with only three playoff spots,” said Head Coach Eric Sutz. “So to finish in a tie for first is a big accomplishment.”

Sutz believed that the biggest reason behind the successful campaign is the team chemistry starting from their captains, who helped set the tone for a hard-fought season. He also feels that there isn’t any difference talent-wise between them and the teams they faced off with in the conference.

“We were the most composed team and won a lot of close games,” said Sutz. “I think that some of the abilities the girls had was trusting each other. The relationships both on and off the softball field really made a big difference.”

When it comes to addressing any offseason needs to improve for next year, Sutz simply wants to get better in the offseason and is looking ahead for next year.

“Once you accomplish something, you reset and start all over again,” said Sutz. “We talked about getting better now till March.”

With 2016 in the books, the Schreiber varsity softball season will be looking forward to building on their successful year with an even better 2017. Although they’ll graduate two seniors, the bulk of this year’s edition will be back next year as they expect to keep the current trend of winning alive.

“Next season for us starts now,” said Sutz. “We have some exciting things planned and look to continue building that culture. That culture continues to reward us with competitive softball players and a chance
to win.”