Dan Marmor is God, a comedy by Schreiber High School graduate Dan Marmor, will have its world premiere at the Secret Theater, Long Island City, as part of the 2016 UnFringed Festival. The play centers on social media, narcissism and religion. It pokes fun at the practice of creating online personas on Facebook and other social media that show that people are having fabulous times, but often bear little resemblance to reality. When Dan tells his friends on social media that he is God, word spreads across the Internet. Dan’s roommates think he has lost his mind, but they are caught off-guard when willing disciples arrive to do Dan’s bidding. 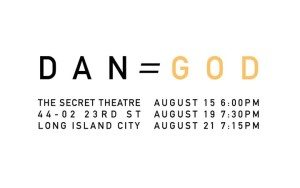 The real Marmor graduated Sousa Elementary School, Weber Middle School and Schreiber High School in 2006. He later earned a bachelor’s degree from Stanford University and a master’s degree in dramatic writing from NYU Tisch School for the Arts. His serialized novel, The Corners I Remember, is featured on the website www.literarymanhattan.org.
The play is part of New York City’s UnFringed Festival, which seeks new and exciting works that challenge audiences. The festival facilitates lively discussion and interaction between artists and viewers.