Port Washington residents have been working hard to bring awareness to Southern Land Company’s (SLC) proposal for a luxury apartment building on Shore Road. The parcel of land Southern Land Company has scouted out is located at 145 West Shore Rd., next to North Hempstead Beach Park, more commonly known as Bar Beach.
Southern Land Company is asking for the parcel of land to be changed from a Residence AAA zoning (Single-family residencies) to a Multiple Residence zoning. The proposed multi-resident building would be a 96-foot tall, seven-story building with 176 apartments on a two-acre parcel.

The construction of the building would not only be a massive eyesore to Port residents and all who frequent Bar Beach, but the building poses multiple threats to the environment and economy. The developer’s plan for West Shore Road violates six zoning codes, jeopardizes natural assets and encourages dense urban development, according to critics.
Zoning code violations include parking and intrusion on park land, population density violation, height violation, and depth side, back and front violation.
Residents Steven Catrone, Hilary Himpler and Edda Ramsdell have been working to compile research, statistics and relevant information to provide elected officials and Port residents with reasons to stop Southern Land Company from pursuing Port Washington.
“Our key argument is we don’t want a change of zoning at all,” said Himpler. “As soon as we grant this, we will get a whole string of apartment buildings on the shoreline. So we are trying to avoid that before it even begins.”
In this situation, New York’s State Environmental Quality Review Act (SEQR) has to be considered. According to the NYS Department of Environmental Conservation (DEC) website, SEQR “requires all state and local government agencies to consider environmental impacts equally with social and economic factors during discretionary decision making.” This process has to be used when more than one development is being constructed on a property or when designated parkland will be used for development.
In January of 2021, the Town of North Hempstead identified the type 1 considerations from the SEQR that need to be considered concerning the proposed Southern Land Company plan. Those considerations are as follows:
• Surface Water
• Groundwater
• Flooding
• Aesthetic Resources
• Transportation
• Noise, odor, and light
• Human health
• Community Plans and Character
• Financing and accountability.
The residents working to keep SLC out of Port Washington have spent their weekends and free time researching and collecting data regarding the type 1 considerations from the SEQR process.
Flooding Concerns 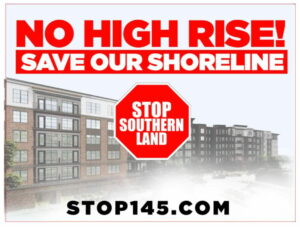 Catrone pointed out that if the apartment building were to be built, it would be among the tallest buildings in the town of North Hempstead. While Southern Land Company says that two of the seven stories would be underground for parking, that still leaves five stories above ground and the dangers of underground parking in a DEC wave action zone.
The parcel of land proposed for SLC’s new development is in a designated area along the coast at high risk for flooding due to storms or seismic sources. Structures built in such locations have Federal Emergency Management Agency (FEMA) regulations and recommendations to consider when building.
FEMA’s regulations set forth procedures and responsibilities, including avoiding floodplain development and new construction in wetlands. Structures built in wetlands would require evacuation for everyone, including their cars, if a severe storm hits.
“What [FEMA] advises is that area should have very well attended wetlands, not buildings,” Himpler said.
The parcel of land has already experienced flooding from severe storms, and the chance of erosion and flooding will just increase with higher tides due to climate change.
Aesthetic Appeal and Community Character
While aesthetics may not seem to be a significant concern to some people, it is a top consideration for the project’s opponents. Bar Beach is a beloved location for not only Port residents but North Hempstead residents, and being right next to a massive apartment building is not part of the view residents expect to see when visiting the beach.
When speaking with Catrone, Himpler and Ramsdell, all three residents expressed their love for Bar Beach. Ramsdell brings her grandchildren there to swim and play, and Catrone frequents the beach often during the hot weather.
“Building this seven-story monstrosity with 176 apartments on only 2 acres of land is like trying to fit 20 pounds of baloney in a 10-pound bag,” Catrone joked.
“[SLC] is talking about installing a speed boat marina,” Ramsdell said. “I can’t imagine having speed boats going back and forth right there when you are trying to swim.”
North Hempstead Beach Park is currently undergoing a massive renovation which received $1 million in federal funding. Months of meetings and visioning went into planning the Bar Beach renovation.
“All of the taxpayers in the Town of North Hempstead have put a lot of money into the whole process of the Bar Beach renovation,” said Himpler.
The master plan of what Bar Beach should look like has been completed for some time now, and a large apartment building that would use parkland for parking was not considered.

The town and community put in time and effort to plan the beach renovation and create a place that would include charm and generous amenities. Cementing over parts of the beach disrupts the vision for the renovation that so many are looking forward to.
Noise, Odor and Light
The parcel of land on West Shore Road is on the coast and across from 200 acres of the Hempstead Harbor Woods and Moutain Bike Trails. Critics say that 176 apartments filled with families jeopardize the safety of the nature preserve and aquatic life offshore.
The Harbor Management Plan for Hempstead Harbor was prepared for the Hempstead Harbor Protection Committee with support from Nassau County, North Hempstead, the Village of Sands Point, and other neighboring villages and towns.
According to the Harbor Management Plan, their goals include increasing water-related recreational opportunities within and along the shoreline and protecting the harbor’s natural environment, surface water quality, wetlands, coastal fish and wildlife habitats.
“There are 220-something species of bird in [the Hempstead Harbor Woods] in addition to fox, deer and bunnies,” said Himpler.
The Town of North Hempstead Planning Office provided a supplement to the full environmental assessment form that details aspects of the SEQR type 1 considerations. The impacts on noise, light and odor expect environmental remediation and subsequent construction period to last from 18 to 24 months. Common construction impacts listed include traffic detours, transport and use of heavy equipment, temporary work lighting and stormwater diversion for an extended duration.
The commotion and pollution that comes with the months of construction and the following emissions from added cars from the hundreds of people living in the apartments will affect the wildlife in the woods and water surrounding the area. Protecting the harbor’s viability and water quality is a priority that concerned residents are looking at when considering the SLC development.