This August, the 2016 Olympic Games will take place from Aug. 5 to 21 in Rio de Janeiro, Brazil. Amid all the bad press that the sailing venue in Rio has suffered, the event is still on and all in the sailing community are rooting for the sailors representing the U.S. This column will follow the action in August. But in preparation for the event, your columnist thought it would be fun to go back in time to the very first Olympics when sailing was part of the event. Sailing was first contested as an Olympic sport at the 1900 Paris Games. Following a no-start due to high winds at the first modern Olympic Games in 1896, sailing’s 112-year Olympic history began on the River Seine at Meulan on May 20, 1900. 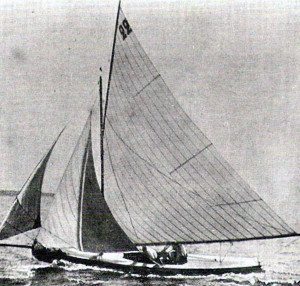 The International Yacht Racing Union (IYRU), the international governing body which would become World Sailing, wouldn’t exist for another six years. This meant there was no established international rule book for sailing, so the 150 competitors from six nations would have followed their local rules—which must have led to some confusion. It also meant that the boats were not standardized like they are today and were instead placed in different ton categories according to the Godinet rule, which considered displacement, length and total sail area. Despite the lack of structure and less than ideal wind conditions, the competition was a relative success. The French were the big winners, dominating with 24 of the 39 available medals. However, it was a Swiss sailor who captured the public attention. Helene de Pourtales, one of the crew of the winning 1-2 ton class, made history when she became the first-ever female Gold medalist of the modern Olympic Games.

Since that first time when sailing was introduced into the Paris Olympic Games, the classes of boats allowed to compete have evolved to reflect advances in yacht design. Equipment advances have created a trend towards smaller crafts, placing ever-greater demands on the capacities of the sailors. Thanks to Daniel Smith, World Sailing, posted in Scuttlebutt Europe (www.scuttlebutteurope.com).

Fast forward to modern times. After the great weekend of the America’s Cup World Series, one would think that would be the signature event for the summer. Think again. The Clipper Round the World Race is returning to NY. In its 20th year, the world’s longest ocean race is bringing a fleet of 70-foot ocean-racing yachts to NY. They are scheduled to arrive between June 12-14, after having completed more than 30,000 nautical miles of racing, setting off from London last summer. The fleet will berth at Liberty Landing Marina, Liberty State Park until June 20.

The Clipper Race New York stopover offers the public the chance to tour the yachts, meet the crews, attend public talks and participate in sailing experience days on these ocean racers. The stopover schedule will be updated regularly. For the most up-to-date schedule, follow the race @ClipperRace on Twitter. The schedule:

Race Arrivals: The race fleet is estimated to arrive at Liberty Landing Marina from June 12-14. Follow the fleet’s progress and current standings at www.clipperroundtheworld.com.

Race Village: From June 16-20. Free to attend, the Race Village will feature attractions for all ages, including opportunities to see the Clipper Race yachts and attend talks by crew.

Free Open Boat Tours: From June 16-18. Go to the Clipper Race Dome in Liberty Landing Marina to step on board the stripped-out ocean-racing yachts and meet the crews preparing for the next race of their 40,000-mile extreme adventure. This is a unique opportunity to get on board an ocean-racing yacht unlike any other. If you’re eager to test your limits beyond belief and find out how you can take part in the next race, come on board a Clipper 70, take a look around and hear from current crew what to expect. You will find out more about the selection process, training, the race, the fleet, stopovers, personal logistics and, most importantly, the race crew. You’ll either walk away inspired or scared. One thing you won’t be is bored.

Courage is Contagious: The Story of the Clipper Race: On Thursday, June 16, at Liberty Landing Marina. Join us to learn about the Clipper Race and find out what it takes to compete from a previous circum­navigator. To book your free spot, go to www.eventbrite.co.uk/.

On Sunday, June 19, at Liberty Landing Marina. Join us to learn about the Clipper Race and find out what it takes to compete from a previous circumnavigator. To book a free spot, visit www.eventbrite.co.uk.

Future Clipper Race Crew sailing experience: Become an Ocean Racer for the Day: On Saturday, June 18, exclusively for those who dare to take on the Race of Their Lives, join us on board a stripped-out ocean-racing yacht for a 4-hour sail on the Hudson River and become a Clipper Race Crew member for the day. This will give you an opportunity to sail on board a Clipper 70 before deciding whether to sign up for a leg, combine several or complete a full circumnavigation.

Race Start: On Monday, June 20, come to the Liberty Landing Marina as the fleet performs a parade of sail down the Hudson River.