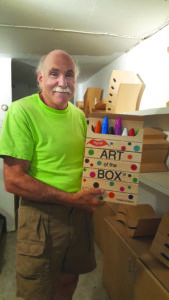 When Ray Seth Ehrlich was first hired in the Port Washington School District in 1974, he worked as a shop teacher at Sousa for years before migrating to Weber Jr. High where he was tasked by the district with developing a full-blown technology program for the schools.
A monumental effort, Ehrlich applied his skills to bring the schools into the 21st century and the course once named shop turned into tech on thousands of students’ daily class schedules.

After 36 years, Ehrlich called it quits and retired (well, sort of), using his talent and renovating his Port Washington home where he moved to with his wife, Lauren, a retired library teacher. But holding tools in his hands all his life made him itchy to create more abstract art and expand his skills to go where no other artist has ever gone before. The result is a workroom filled with intricate hand-made acoustic guitars and one-of-a-kind 17-foot custom wood-inlaid kayaks that people often refer to as “one of the pinnacles of fine woodwork.” In fact, Popular Science, Guitar Magazine and Men’s Journal featured him in issues for his craftsmanship. And now the Port Washington Library will recognize his unique artistic abilities with an art display on Oct. 2 through 31, featuring (another first for Ehrlich) 43 wild creations of jewelry boxes that could very possibly end up at the MOMA: a woman’s corset; a wave with a surfer; a charred box; a large zipper; a box of crayons; an artist’s palette and more. The whimsical, mysterious and thought-provoking jewelry box designs are covered in maple veneer that he says, “was inspired by my love and fascination 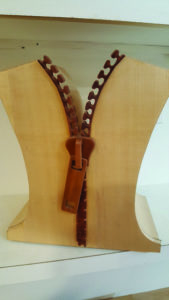 Ehrlich has frequented museums in NYC at least twice a week throughout his life and says he’s motivated by challenges, noting “A project is only interesting to me if I don’t know how to do it. If it’s a challenge, and of course there is always a certain amount of failure that occurs, but failure is fine. I consider it a learning experience as experimentation and failure go hand in hand. It’s part of the human experience.”

When Ehrlich isn’t immersed in working on creations using his tools—15 saws, sanders, 50 electric handlers, circular and band saws and a potter’s wheel—he practices Tai Chi, leads an ethics discussion, movie, a short story and book of the month club; a men’s group and is an officer at the North Shore Kayak Club. He and Lauren also travel extensively overseas.

The Port Library display in October is called “The Art of the Box.” It’s that and more. For a preview of his work visit YouTube, Art-of-the-box. 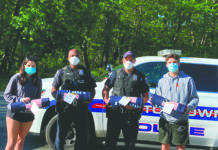