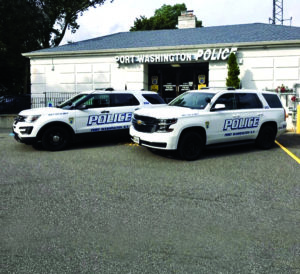 Residents on Derby Road in Port Washington raised their concerns after learning the home located at 4 Derby Rd. was purchased by the Port Washington Police District (PWPD) in early March. The home, which sold for $780,000, is directly in back of the existing police district parking lot.

“We didn’t plan on purchasing the home, it just happened to come up for sale when we were starting to get things going with building a new building,” Police Commissioner Tom Rice said.

Last December, the Port Washington News took a tour of the police station to get a first-hand look at the issues that the PWPD is facing with their current building. The small building, which originally housed approximately 35 people, now holds more than 100 on a daily basis. Due to the increase in staff, conditions in the building have become severely cramped. There is just not enough space to hold the number of employees and equipment they need for smooth day-to-day operations.

Some of the many concerns regarding the building’s lack of space include narrow, single-file hallways, no dedicated records room, a long winding staircase which leads to the detainment area, no public restrooms or ADA compliant ramps for handicapped citizens and an inadequate parking lot for police vehicles or the public. Although regular maintenance on the building has been done there have also been significant problems with the sewage lines, plumbing and electrical, as well as flooding throughout the basement of the building.
The district has been in dire need of a new building for the last several years but no plans have ever come to fruition. While the district currently has no plans to demolish the home right now, the PWPD held a meeting on Aug. 10 to reveal conceptual plans for their new facility.

“The concept is that the building will be pushed back closer to the cemetery so we don’t disturb the residents on Derby, that’s as far as we’ve really gotten,” Rice said. “It’s all in the very early stages. We’re waiting for a feasibility study and that should be done mid-winter or early spring.” A feasibility study is an analysis that takes all of the projects factors into account and makes recommendations on how likely the project is to be completed successfully. Conducting a feasibility study, however, can take 90 days or more, depending on the factors included.

“We started this three years ago, this is a very, very slow process,” Rice said. “We didn’t start this in January when we purchased the property.”
At the meeting, residents were shocked, angered and upset at the proposed conceptual plans, which include demolishing the home at 4 Derby Rd. and replacing it with more than 20 parking spaces.

“What they revealed to us at the Aug. 10 meeting was essentially our worst nightmare,” resident Karen Marotta said. “My house directly faces this future parking lot. Everyone in the neighborhood is very concerned. I can’t imagine if I was living next to this beautiful old Cape home from 1938 and it was turned into a parking lot. I just can’t imagine it.”

Although a letter was mailed out to residents on Derby Road, several people on the block feel that purchase of the property and the conceptual plans were not well known to the public before the August meeting. Deborah Weyl, who lives a few houses away on Derby Road, has lived in Port Washington for nearly 15 years and describes feeling frustrated over the lack of communication the residents on Derby have received regarding any plans for the recently purchased property.

While the residents state that the conceptual plans presented by H2M architects was “unacceptable and ridiculous,” many of the residents stated that they are not against the police district having a new facility, merely just the plan for the parking lot in place of the home.

“Everyone feels bad, they do need a larger space,” Rich Berrebbi, a resident who lives next to the proposed parking lot, said. “The real anger at the moment is not at the police, it’s at the plan. I think that the plan speaks for itself. I haven’t found one person that who says ‘okay, it seems rational.’ My kids bedroom is right under the [proposed] parking lot. The plan is beyond ridiculous. What were they thinking when they presented these plans?”
At the monthly meeting on Sept. 8, several of the residents who attended asked the PW police commissioners to have more transparency and communication moving forward.

“We are taking active steps to have more communication with the neighbors and we hope to resolve any communication problems moving forward,” Assistant Chief of Police Kevin McCaroll said. The district has designated a resident liaison to help dispel any false information regarding future plans, and to help keep the community informed when there are updates.

Currently, the district plans to maintain the property until they decide the best way to move forward with their building plans.

“We are still not 100 percent certain that we are not going to sell the home and move to another concept,” Rice said. “As of now we are holding on to the piece of property and we don’t have any plans to sell.”

Several residents would like the property on 4 Derby Rd. to remain a home and are hoping the district will move their headquarters elsewhere in Port Washington.

“We would like them to sell the property back to a resident,” Weyl said. “Leave the neighborhood alone, stay off our block. Leave our Salem area intact as it is. Either renovate what you have and/or get another place. We have plenty of commercial properties. I don’t want to live next to a parking lot.”

“You’ve been trying to renovate your building for 20 years,” Derby Road resident Doug Cornell said. “I get it, that building is dated and it’s a problem, but either move or renovate. I hope they do the right thing and come up with plan B that doesn’t include a parking lot in the neighborhood because it’s highly unpopular.”

After seeing the conceptual plans during the meeting, Marotta hopes the district will go back to the drawing board and consider other options.

“What we are hoping is that they are doing one of two things,” Marotta said. “One is completely going back to the drawing board to whatever their plans are and figuring out something else. The second thing, which is our preference, is that they look for a site elsewhere. We know they have been doing that for many years and it hasn’t worked out.

But maybe their plans for their future property are a bit too grandiose. We would like to see them find another site, because they obviously can’t fit what they have planned for where they are.”

Rice stated that the district is still considering their options for the site and that the plans presented where merely a concept, not a permanent plan.

The district also stated that they do not have any plans to purchase any other properties on the block at this time, and that if a parking lot were to be created given that all variances would be approved by the town, there would only be one entrance to the lot.

“No matter what, whether we keep that property, one thing that is guaranteed is that there will be one entrance into the Port Washington Police District and one exit from Port Washington Boulevard,” Deputy Chief Robert DelMuro said. “Guaranteed there will never be entrance or exit from Derby Road.” The district also stated they do not plan to put any structures up on the Derby Road property.

As of publication, the district is waiting for the feasibility study to come back, and will review their next steps after the study is completed. The Port Washington Police District will hold their next meeting on Sept. 23 at 7 p.m., a location for the meeting has yet to be determined. For questions or concerns, email question@pwpd.ny.gov.