More than 500 residents have signed a petition to stop a 7-Eleven from opening on a busy street in Port Washington.

Town of North Hempstead Councilwoman Mariann Dalimonte stated in an email to her District 6 constituents that the applicants plan to appear before the town’s Board of Zoning Appeals (BZA) for a conditional use permit for a retail food store in the Business-B zoning district, as well as variances for insufficient parking stall size (eight of the 14 spaces are 9×18 instead of the required 10×20) and rear yard setback (garbage dumpster is 5’ from the property line instead of the required 15’).

The applicant filed an application to the Town in October 2020. The town then issued an omission letter to the applicant in December. The applicant refiled their application in February and a disapproval letter from the Building department was issued later that month. Councilwoman Dalimonte’s office then received an email in March from the applicant’s attorney requesting a list of civic and neighborhood organizations whom they could meet with to discuss the proposal. The town provided the listing and requested that the applicant schedule Zoom meetings with the community.

The applicant, whom filed the BZA application in April, will need to appear before the board for a hearing. The BZA will render the final decision on the matter, rather than the town council. At the time of publication, the application did not appear on the BZA’s agenda for either the June 2 or June 16 meetings. 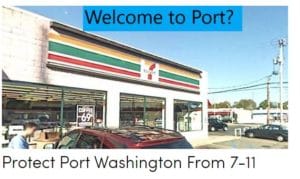 The Care2 petition entitled “Protect Port Washington from 7-11” was created by “the Concerned Residents of Port Washington and Surrounding Areas,” and listed several concerns regarding the proposed convenience store. The petition cites traffic congestion, an erosion of the character of the area and an increase in the lack of safety for pedestrians in the surrounding area due to an increase in vehicle traffic as reasons for why they feel this is a poor choice for the location.

“A 7-Eleven at 1020 Port Blvd. will increase traffic and introduce unsustainable volume to an already busy intersection in town,” the petition states. “It will force cars to divert and take side roads through our neighborhoods. Residents are already stressed by increasing cases of local traffic failing to abide by basic rules of the road (stopping at stop signs, observing speed limitations, yielding to pedestrians); any increased traffic further endangers our community—both pedestrians and drivers.”

Residents who signed the petition left comments stating their disapproval of the proposed store.

“This is absolutely the wrong business for Port Washington and especially at this location,” one signer of the petition wrote. “No one who cares even a little bit about the fabric of this special town would support this proposal. In addition, the intersection in question is already extremely busy, with traffic moving from many different and confusing directions. The crossing guards do an excellent job under high stress. In addition to shoppers, hundreds of students cross that intersection everyday. It simply is not safe for any business of this nature to be allowed to open up at this location. Say no to 7-11.”

Another signer wrote, “As a PW native who now lives in a town with a 7-11, I can say it definitely creates dangerous traffic situations for cars and pedestrians. There is also too much litter generated by this type of store. Keep the corporate vibe away. Support the local businesses.”

Many signers reiterated the same sentiments stating that they have concerns that a convenience store in this location would lead to a fatality due to the heavy car and pedestrian traffic and the constant comings and goings of cars visiting the store.

One resident commented on the petition stating, “The proposed 7-11 will compound an already overcrowded intersection. There are several local merchants who already provide services that the proposed 7-11 would supply. I have lived on this peninsula since 1966, absent those years those years in school and training. I feel strongly that a 7-11 at the corner SW corner of PW Blvd and Main Street is bad for this community…”

7-Eleven initially filed an application with the Town of North Hempstead last year to take over an abandoned automotive shop on 260 Plandome Rd. in Manhasset. However, residents vehemently opposed the project, creating a petition that garnered more than 1,500 signatures. The application was later withdrawn by the applicant.

Residents who would like to voice their opposition or support for the proposal to the BZA can email bzadept@northhempsteadny.gov or write a letter to the Town of North Hempstead Zoning Board of Appeals 210 Plandome Rd. Manhasset, NY 11030. The BZA calendar can be found on the Town’s website at northhempsteadny.gov.