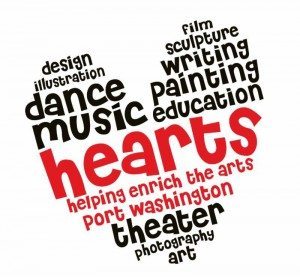 HEARTS PW (Helping Enrich the Arts of Port Washington) is a grassroots not-for-profit organization that helps provide Port Washington residents with meaningful arts experiences. The volunteer-run organization aims to enhance arts programs and provide residents of all ages with the tools and resources necessary to explore the arts.
HEARTS PW helps provide these tools by funding programs and distributing grants within the Port Washington community. Although the organization contributes to a variety of programs for all ages, there is a heavy focus on Port Washington students in the public school district. Since 2011, the organization has provided 180 grants within the district.
However, the organization’s outreach extends beyond funding and grants. For example, HEARTS PW hosts its annual arts and musical festival, PortFest.
Eric Gewirtz, the president of the organization, said that: “What I love about something like PortFest is that it allows [HEARTS PW] to create an opportunity for others to experience arts in the community and to showcase the types of programs we’re able to support.”
This fundraiser allows Port Washington residents of all ages to explore the arts in a new way. With the enrichment provided by HEARTS PW, students have been exposed to new ideas, enhancing their learning experience.
Considering this unwavering support, recent Schreiber High School alumni were inspired to give back to the organization. In doing so, they organized “Port Sings.” This cabaret fundraiser was the first of its kind. Rather than HEARTS PW organizing the event–as they do with their annual PortFest and Red Party fundraisers–the non-profit was approached by the event organizer, Casey Fanous.

The cabaret featured six recently graduated Port Washington students who have gone on to pursue music professionally: Casey Fanous, Eden Franco, Margaret Harper, Michael Kamerer, Ian Miller and Sarabeth Schiff.
“[HEARTS PW has] not been asked before by someone who has benefited from a HEARTS grant program to come back and do something to help us as an organization,” said Gewirtz, “and it is just so meaningful to us.”
With the support that HEARTS PW has given the school district, the Port Sings cabaret aimed to highlight some of the talented students that have received HEARTS PW’s support.
“Due to their active involvement in the arts community here in Port Washington, HEARTS has been a part of my life since elementary school,” said Fanous. “I feel very lucky to have grown up in a town that cherished the performing arts as greatly as they do, and I know HEARTS has much to do with cultivating that environment.”
Eden Franco, one of the performers at Port Sings, expanded on this idea:
“I owe much of my current success as an artist to the many concerts, musicals, art shows, performances, and classes I was exposed to as a student. I want to continue supporting the organization that supported me.”
Andy Blacker, an advocate for music in Port Washington, sponsored the event. After the launch of his first project – an app called “Bandsintown” that allows users to find concerts and live music nearby – Blacker wanted to further contribute to the arts in town.
“In today’s crazy world I know two things that can change our future for good: music and young people.” said Blacker. “[Port Sings] was the culmination of both, and we are so proud of this event and are happy to announce our commitment to do it again.”
The proceeds of the event will go directly to HEARTS PW, contributing to a scholarship awarded to students pursuing music professionally.
“In high school, I always told myself I wanted to give back in some way to this organization,” said Fanous, “and I thought what better way to do that than to showcase some Port talent who have all benefited from HEARTS’ support and dedication to the community.”
For anyone interested in donating or learning more about the organization, more information can be found at heartspw.org.