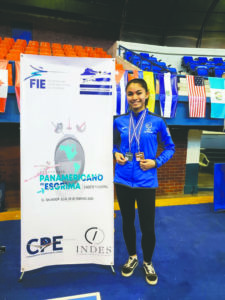 Erica Hooshi found herself standing on a podium earlier this year, receiving a medal with her fencing team. It was something she never expected.

Most people spend years playing a sport before finding the type of success that earns them a spot among the top athletes in their respective sport.
The Jericho High School student did not find herself going on the same path as many of her competitors.

She is one of only four junior girls fencers who were selected to represent the United States of America in the Junior Pan American Fencing Championships this year, which is for participants 20 years old or younger.

Hooshi, 16, was the only athlete chosen among this group from the northeastern part of the country, and she is currently ranked 64th among junior fencers worldwide. Meanwhile, she only started fencing three-and-a-half years ago.

“Dylan, the older of my two brothers, was the first in my family to be introduced to the sport,” Hooshi said. “He was sitting in my parents’ office when he was approached by one of their patients, an ex-Chinese Olympian fencer. Like a domino effect, he persuaded my youngest brother Jayden, who then committed to the sport. Eventually watching them both having fun in the sport convinced me to give it a try.”

At the time, Hooshi was dedicated to competitive dancing, a sport that she has earned national recognition and scholarships in.
However, she changed course in the ninth grade and decided to truly dedicate herself to fencing.

Hooshi’s decision to commit to fencing would be one that she would “have no regrets, whatsoever” about.

It helped her earn two bronze medals at the USA Fencing Salt Lake City SJCC Tournament, as well as a gold medal with the senior girls foil team in the December North American Cup in 2019.

“I was able to achieve great success in fencing, not because I trained harder than others, but because of my mindset and passion,” Hooshi said. “Oftentimes, many fencers aren’t aware of this, and question their results despite them continuously working hard. I always like to say that fencing is physical chess, using swords. It requires a lot of thinking and strategizing. It’s mind over matter.”

Hooshi has used that mentality to improve her craft in a short amount of time, with determination bringing her the success she desires.

“I had to overcome self-doubt, fear and lack of confidence,” Hooshi said. “Most fencers begin training and regular lessons from a young age and some as young as 7 years old. I was almost 14 when I first started, which drew a lot of doubt and talk among established athletes who had never seen my name before in previous regional and national events.

“Fencing developed my personality. I had to overcome thinking about what others thought of me and just accept myself for who I am. Once I learned to tackle my fear, my confidence was automatically unleashed and there came a whole new side to my fencing and potential.”

Hooshi realizes that her biggest growth as an athlete has come from her toughest battles, as her ability to overcome adversity has proven to bring out the best in her.

“I mentally review my flaws from previous tournaments,” Hooshi said. “I remind myself of the actions I need to take and the ones to avoid. I’ve come to realize that you learn more from losing than winning.”

While winning is not what Hooshi sees as the best way to learn, she certainly recognizes areas of her fencing style that could help her reach new heights.

“I want to improve my agility, ability to accept criticism and openness in valuing and following others’ advice,” Hooshi said.

A 16-year-old athlete rarely has built such a strong résumé at this point in her life and Hooshi’s early success could be only the beginning for her.