On Friday, Sept. 25, at 7 p.m., meet iconic children’s authors R.L. (Robert Lawrence) Stine and Marc Brown and hear about their collaboration, The Little Shop of Monsters, at the Port Washington Public Library (PWPL).

R.L. Stine and Brown met on Air Force One over a decade ago, while headed to the first Russian Children’s Book Festival. They bonded over a bowl of borscht. In The Little Shop of Monsters, these renowned children’s book icons join forces for a tale that is bound to make you quake and shake in fits of fear and laughter. 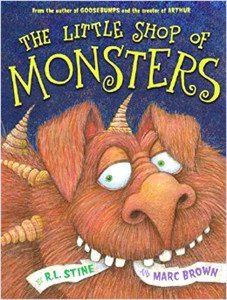 With a narrative voice reminiscent of Jon Stone’s The Monster at the End of this Book, but with Stine’s signature spooky charm and Brown’s wildly imaginative illustrations (created with colored pencils, watercolor, spray paint and gouache), The Little Shop of Monsters is sure to be a new favorite for Halloween and year round.

Stine is the bestselling author of hundreds of horror fiction novels, including Fear Street, Goosebumps, Rotten School, Mostly Ghostly and The Nightmare Room series. His books have sold more than 400 million copies worldwide and have been translated into 32 languages. Stein has also written dozens of humor books for children under the pen name Jovial Bob Stine and created the teen humor magazine Bananas. The Goosebumps TV series was the top-rated children’s series for three years in a row. Coming this fall from Columbia Pictures is the feature film Goosebumps, starring Jack Black as the author. Stein continues to write new Goosebumps books and says that he enjoys his job of “scaring kids.” But the biggest thrill for him is turning children on to reading.

Marc Brown is the creator, illustrator and author of the bestselling Arthur Adventure series and its numerous spinoffs. He is also the codeveloper of the children’s PBS television series Arthur’s World, an animated program which has received multiple awards and has aired in more than 80 countries. Brown’s own childhood and the experiences of his three children are his main inspiration for the stories about Arthur, a lovable aardvark. Born one night when Brown was telling a bedtime story to one of his sons, Arthur soon evolved into the book Arthur’s Nose, and what began as a simple family ritual grew into a full-time profession. Trained at the Cleveland Art Institute, Brown has illustrated numerous books for children. Although he is best known for the Arthur books, Brown thinks of himself more as an illustrator and his work has been exhibited throughout the world.

This event is presented by PWPL and The Dolphin Bookshop and Café. The Little Shop of Monsters will be available for purchase and signing. Priority for entry is given to Port Washington residents—be prepared to show proof of residency. If you are unable to attend and would like a signed book, call The Dolphin Bookshop at 516-767-2650.