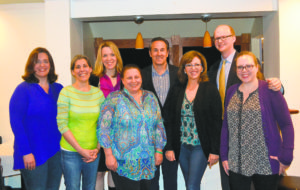 The newly formed Port Washington Democratic Club unveiled its new Board of Directors at its April 4 meeting: President Rob Seiden, Vice President Deborah Abramson Brooks, Secretary Rebecca Hughes Parker, Social Media Director Stacy Mellus, Treasurer Rachel Gilliar, Public Relations Director Laura Leigh Carrol, Membership Director Marian Dalimonte and Independent Director Nick Guariglia.
Port resident William Bodkin decided to organize the club after the November election. Many of his progressive neighbors seemed at a loss for what to do in response to the Republican national victory. For Bodkin, it was an easy choice, observing that, “When you are a Democrat and Republicans have control of everything, you organize.”

In addition to introducing the board, the April meeting featured Nassau County Legislator Delia DeRiggi-Whitton, who discussed the recent corruption allegations regarding County Executive Ed Mangano and encouraged club members to attend an upcoming training on how to use Narcan to counter accidental heroin overdoses. Baldwin County Legislator Laura Curran, who has been endorsed by the Nassau County Democratic Committee in this year’s County Executive race, was also in attendance. Curran spoke of her goal to provide a fresh start for Nassau to end the corruption and scandal of the Mangano era.
The club also featured local residents talking about their responses to national issues. Matt Harris led a discussion on rising incidents of anti-semitism on the North Shore and how to respond to them. In addition, Harris invited all attendees to a town hall meeting featuring Congressman Tom Suozzi, Acting Nassau County Police Commissioner Thomas Krumpeter and Port Washington School Board President Karen Sloan to held on Sunday, April 30, at the Reconstructionist Synagogue of the North Shore.

Amy Chancellor, field director for the Town of North Hempstead Democratic Committee, discussed plans for the town Democrats’ voter registration program this spring and summer. For more information, Amy can be reached by email at achancellor21@gmail.com.

The next club meeting is scheduled for May 11 at 7:30 p.m. Invited speakers include Dean Bennett, a Democrat running for Nassau County Clerk, and longtime Assemblyman Chuck Lavine of Glen Cove, who is running in the Democratic Primary for Nassau County Executive. Registered Democrats are encouraged to check the club website, www.pwdems.clubexpress.com, for more information.