For the second year in a row, the Town of North Hempstead raised and hatched a batch of Northern Bobwhite Quail at the North Hempstead TV Studio in Westbury and released them in local parks. North Hempstead Town Supervisor Judi Bosworth, Councilmembers Lee Seeman, Peter Zuckerman, Anna Kaplan and Dina De Giorgio and Town Clerk Wayne Wink joined Ranger Eric Powers, the host of the NHTV nature show “Off the Trail,” on Aug. 7 to release the home-raised quail into the town’s Hempstead Harbor Trail and other locations.

The quail were incubated from eggs in the town’s TV studio at the “Yes We Can” Community Center in Westbury. After the eggs hatched in late May, the baby quail were kept at the studio for about another two weeks, then transferred to Caleb Smith State Park in Smithtown Park in Suffolk County where they spent the next six weeks maturing. There were 70 quail released on Aug. 7—about 30 along the Hempstead Harbor Trail at North Hempstead Beach Park and another 40 on the 200 wooded acres across from the park— to reduce the numbers of ticks naturally, without the use of pesticides. 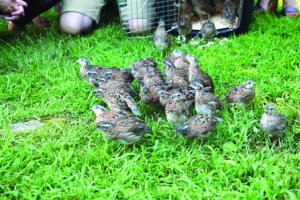 “Lyme disease is a very serious condition caused by deer ticks, which are prevalent in wooded areas and grasslands all over Long Island,” said Bosworth. “The town is constantly on the lookout for natural methods we can use t

o control disease-causing pests that do not involve using toxic chemicals. The fact that we also got to raise the quail ourselves and enjoy watching the eggs hatch, was just part of the fun. Now they will go out into the world and serve as our superheroes against ticks.”

Working closely with biologist Eric Powers, several town employees will be conducting an anecdotal tick study of the Hempstead Harbor Trail to determine how the presence of the quail affects the population of ticks. The study team will be periodically collecting ticks by dragging a white sheet over vegetation along the trail and then counting them to chart the effectiveness of the quails after they have been established in that area for several months.
To join the spring-time Quail vs Ticks Study, visit Powers’ website at www.YC2N.com. For more information, call the town’s 311 call center.