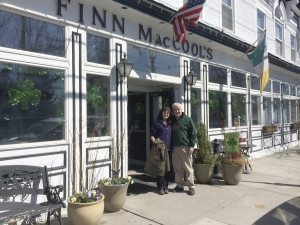 Finn MacCool’s has been part of the fabric of Port Washington for 30 years. Owners Connie and Geraldine O’Reilly fell in love with Port Washington and decided to open an Irish restaurant and pub in 1984.

“We purchased the building and it was a warehouse store,” Geraldine said. “Connie did a lot of work to make it into the beautiful restaurant it is today.”

Connie and Geraldine have raised their six children here, attending Manorhaven, Daly, Guggenheim, Weber and Schreiber. “We love the comradery of the Port community,” said Geraldine. “The schools do a great job preparing the kids for college.”

Connie had many great stories about the Mets in the 1980s, who were regulars at Finn MacCool’s.

“The players lived in Manorhaven and would come into Finns after games. Lenny Dykstra, Darryl Strawberry, Dwight Gooden were all here back then,” said Connie. “After they won the World Series in 1986, they came back to Finn MacCool’s and drank Dom Perignon. The police had to close off the street because of all the people trying to get in to see them.”

Finn MacCool’s, named after the mythical giant of Gaelic legend, is a staple in the Port Washington community for its food, friendly atmosphere, décor, live music, including a harpist on Saturday nights and Sunday afternoons, and most of all its welcoming hosts, Connie and Geraldine O’Reilly.