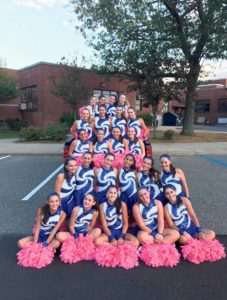 The Portettes are the Schreiber High School kickline and dance team that has been performing at many events over the years. They perform at the boys football games in the fall and both genders basketball games in the winter. Supporting the Port Washington community, this group participates in Pride in Port and the annual Memorial Day Parade.

Composed of approximately 23 to 30 young women, the organization incorporates Rockette-style kickline with hip-hop, jazz and lyrical influences into their dances. Practicing their precision moves at least twice a week, these girls follow a student choreographed routine. Sometimes the team practices early in the morning before school and all are dedicated members to make the dances perfect.

Coach Lauren Foster-Holzer has been working with the Portettes for four years and captains Lauren Seltzer, Allie Chase, Grace Robinson and Natalie Burke are motivating leaders to the rest of the team. “My favorite part of a performance on the team is the moment just after finishing when the whole team connects over the rush of adrenaline we all get. Our strong team bond really pays off in performances. Everyone works hard to make sure the team as a whole looks its best, rather than focusing on their individual performance”, said senior captain Allie Chase.

Performances at Schreiber sports games gets the crowd on their feet and cameras are always nearby. The team brings school spirit to the big Port Washington Pep Rally in the fall where they show the student body what they have been working on. “Our head-to-toe sparkles definitely attract some attention in the hallways, but our love of school spirit and commitment to the team trumps any embarrassment we might feel,” said Chase.

The team is not to be confused with the Schreiber Cheerleaders who perform stunts, lifts and jumps to cheer on Schreiber’s teams. The Portettes are more of a Rockette and dance-based team. Both groups are an important part of making the sport games so enjoyable and memorable.

Not only is this a school sports team that gains one Varsity letter at the end of the season, it is also a team dedicated to raising money for the school. Money for the Coaches Vs. Cancer game on Jan. 19, was raised as team members used social media and announcements to draw attention to the cause. With the help of the boys basketball team, they were able to raise awareness and funds for cancer, something that affects a big part of the community.

The Portettes dance team is an integral part of Schreiber High School sports. For many years they have performed for the students, parents and the town of Port Washington, both to encourage school spirit and to put on a magnificent program that serves to bring energy to our riveting sports games.

Sydney Rosenthal is a senior at Schreiber High School.