On Friday, Sept. 11, the Port Washington Yacht Club (PWYC) began its Charity Cup Regatta, which lasted all weekend. In what started out as an attempt to honor a special person, your columnist entered AVON39: The Walk to End Breast Cancer and started fundraising to crush this dreaded disease. The journey began last February. Club leadership recognized that the statistics about breast cancer were devastating: about one in eight U.S. women (about 12 percent) will develop invasive breast cancer over the course of her lifetime. In 2015, an estimated 231,840 new cases of invasive breast cancer are expected to be diagnosed in women in the U.S., along with 60,290 new cases of noninvasive (in situ) breast cancer.

And breast cancer is not just for women: about 2,350 new cases of invasive breast cancer are expected to be diagnosed in men in 2015. A man’s lifetime risk of breast cancer is about 1 in 1,000. (Source: www.breastcancer.org.) Everyone has a friend, a mother, a daughter or sister who has breast cancer or is a survivor. And that is why the PWYC chose to help raise awareness and funds to conquer breast cancer by choosing the AVON39.

The weekend started at Happy Hour on Friday with live karaoke compliments of Dan Walz, Andrew Drazic and Christopher Harnden. What a fun way to begin fundraising for a great cause. Saturday brought the Grand Cocktail Gala of Hope. The rainy weather did not dampen the spirits of the crowd that gathered. Rita and Gene Brooks, gala chairs, set the stage for a beautiful evening. They turned the club into an elegantly understated white and pink space with twinkling lights high above. It was just perfect for a Gala of Hope. Add in the many raffle baskets that Sharon Abruzzo created, the outstanding food the club is known for, plus the help of auctioneer Joe Lynch, one can only say the evening was beyond expectation.

The regatta was on Sunday and 19 boats entered, the most in a long time. The patio was packed with skippers, crew and family. The rain held off for most of the day but the racers were greeted with an absolute downpour as they crossed the finish line. One would expect a veteran Principal Race Officer (PRO) like Tom Egan could have prevented that last bit of rain, but Mother Nature must have been in one of her moods. Final results are listed on www.yachtscoring.com. Top winners: PHRF 1: Carl Olsson, Morning Glory, Larchmont YC; PHRF 2: Chuck McCarthy, Speed D8, PWYC; and PHRF Non-Spinnaker: Joel Ziev, Sundance, North Shore YC. Joel Ziev was the overall winner and will receive a Larry Chrapliwy oil painting of his boat.

Anthony Dekkers, who grew up sailing on Manhasset Bay, raced in the PWYC Charity Cup Regatta on Al and Craig’s Avalanche with his two children, Luca, 5, and Anabella, 9. About his experience, he said, “Anabella sailed with us in the spring charity event and really enjoyed being able to sail with her dad on the big boat (something I do a lot of on my own). This time around on my way out of the house it was clear that Luca wanted to get involved. The charity event being a bit more low-key makes for a great opportunity to bring the kids out on the big boat. They got an opportunity to see what big boat racing is about, spend time with their parents and learn a little about the boat and surrounding coastline. As we sailed we pointed out the Connecticut shoreline, Hempstead Harbor and even the little water tower where we live in Sea Cliff.”

In addition to raising over $33,000 for Avon39: The Walk to End Breast Cancer, two other memories are take-aways from the event and they both relate to PWYC junior sailors. PWYC Junior Sailing Chair George Catallo took a crew of junior sailors out to race on Sunday on Warhorse and they did really well and had a great time. The second memory is of Jessica Price and her brother Phillip who raised $1,265 and $535, respectively, by selling raffles and burgees during the event.

Many thanks to all who helped: Dan Hanley, Charity Cup cochair, Rita and Gene Brooks, Sharon Abruzzo and the staff at PWYC. Thanks to Tom Egan and his race committee. And to all who bought a raffle, a restaurant night out or donated to the cause, many thanks. And a big shout out to their sponsors: Astoria Bank, Total Dollar, Larry Chrapliwy, (artist-in-residence,) Cow Neck Peninsula Historical Society and Anton Media Group. Many, many thanks. 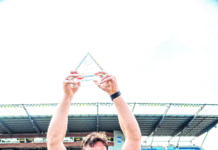 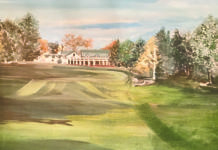