On June 17, the Port Washington Public Library (PWPL) hosted a screening and discussion about the independent film Walk With Me. The event was hosted in collaboration with Be The Rainbow, a local organization that aims towards supporting and celebrating LGBTQ+ visibility and pride.
Walk With Me depicts the story of a young queer woman finding her identity and place in the world. The film, written and directed by Isabel del Rosal, follows a 30-year-old woman who unexpectedly falls in love with a woman after leaving her husband. 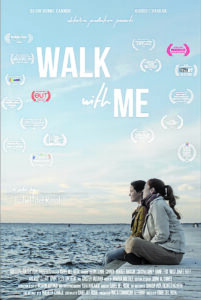 “Walk With Me is a film about self-exploration and transformation. These global themes in the context of LGBTQ+ stories create an important consolidation—a film where queer visibility and representation are forefront and a place where people can see their stories reflected back to them,” said one member of Be The Rainbow.
The film was released in 2021 and has won many awards, including the Spirit Award and Best Actor at Brooklyn Film Festival, Best Emerging Director at Manhattan Film Festival, Best LGBTQ Film at Lady Filmmakers, Best Female Composer at Toronto Int’l Women’s Film Festival and Best Feature at New York Int’l Women’s Film Festival in addition to many other nominations.
Not only did the PWPL screen the film, but it also hosted a discussion with Rosal.
This is just one of many events that the PWPL hosted for Pride Month. In addition to this screening, the PWPL has hosted an educational event on queer history before Stonewall and a Pride Craft event in the Children’s Room. Staff members have put together displays that hold recommended reads regarding the LGBTQ+ experience.
“We, as a public library, are able to be a forum for the community to have entertaining events, educational events, and I think that one of the important things that we’re able to do is highlight some stories that have not been fully told or not told at all,” said Programming Director James Zeh.
As a public establishment, the PWPL aims to serve each and every person in the community. By opening a dialogue about untold or ignored stories, the PWPL can ensure its ability to represent everyone. Exposing audiences to new experiences allows patrons of the library to understand new perspectives.
For this reason, it is important to note that the Walk With Me screening was intended to appeal to everyone, not just LGBTQ+ individuals.
“Whatever your identity may be, it’s a love story, and I think that it’s something everyone can relate to in one way or another,” said Zeh.
The film looks into what it means to explore and embrace your identity, something that everyone can relate to no matter their sexual orientation.
“Walk With Me explores love in its purest expression, allowing viewers to really see and understand that simple truth that love is love,” said Rosal.
Rosal explains that the different elements of the film aim to “take the viewer on a personal journey that allows them to better understand the subtleties of what LGBTQ+ people navigate when coming out.”
By sharing stories that have been historically underrepresented, the PWPL aims to promote inclusion through its programs and services. As a forum for the Port Washington community, the PWPL serves as a space for every resident to see themselves in the books and programs provided.