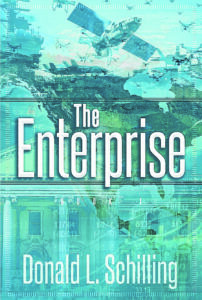 A new novel by longtime former resident Donald L. Schilling, The Enterprise Book 1, is a riveting historical political novel. Walking the reader through events since World War II, the reader follows the escapades of the Professor and his colleagues, as they help the world become a better place, while fishing at prime locations and eating in gourmet restaurants that the reader will recognize.

The Enterprise is a fictional City-State formed by a few of the many members of the US Military, Engineers, and Scientists who participated in World War II (WWII), as well as the wars and ‘Police Actions’ that followed. At first, the Enterprise was merely a privately held company that designed electronic equipment, robot-warriors, and weapons which they sold to the US Armed Services. In order to help pay the bills, one of the founders of the Company, who was extremely well versed in buying and selling securities, used his talent for the Company’s benefit. After a short time, the Enterprise bought an Island near the Bahama Islands, in the Atlantic Ocean, and declared itself a Country, the Enterprise Isle.

The Island was protected from attack by the use of the weapons it had developed (these weapons may well be the weapons used by the US, its allies, and its enemies by 2035).

After repeated attacks, these enemy countries, having lost planes and ships, as well as countless members of their armed forces decided not to annoy this new Country. Thus, the Enterprise grew in wealth and gained the respect of the nations of the world. During the intervening years, it developed an engineering and a medical school that were the among the best in the world and employed equipment found nowhere else.

Over time, the Enterprise was one of the 5 wealthiest countries in the world. Its GDP was $10T in 2020, and its philosophy was to trade with any country that would trade fairly with them. Any company, or country, that dealt unfairly, suffered severe consequences. Indeed, it had already become known that the Enterprise had weapons that could destroy any country in the world with little damage to itself.

The Enterprise’s primary objectives were to provide for its 4 million Citizens, and to try not to interfere in other countries’ business.

This second item was not always easy to accomplish. After all, we all have friends!

The book leaves the reader reeling, reconsidering history and the many events that have occurred.

The Enterprise Book 1 launched on Kindle, ebook, hard cover and paperback and has received only 5 star reviews, including comments such as “A most powerfully written well imagined story. A real page turner” and “is easy to buy, BUT hard to put down till the end of your reading”. This novel, Schilling’s 13th book and first novel, is published by Fulton Books, and is available on Amazon, Barnes and Noble, Itunes and GooglePlay. The paperback and hardcover versions can be obtained for $26.95 and $37.95 respectively, or as an e-book for $9.49. Alternatively, the novel will be available at the Port Washington Public Library.

About the author:
Dr. Donald L. Schilling had been a Sands Point resident for more than 30 years, and his adult children all graduated from Schreiber High School in Port Washington.

Professor Schilling has lectured to scientists and engineers throughout the world. The knowledge received from these interactions has guided him in creating the fictitious history of our world and the weapons used by the Enterprise. These weapons will likely be standard equipment within the next decade.

Dr. Schilling spent his final days in Palm Beach Gardens, Florida, with his wife and has three great children and four super grandchildren.