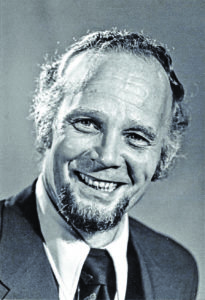 Nissen led a creative and adventurous life that rode the technological and political waves of the 20th century. Despite having been blacklisted in the McCarthy era, he had an illustrious career that spanned both coasts, from the golden age of broadcast television to the high-tech boardrooms of Madison Avenue. With his wife Cinde, he raised a family of four children.

Born in Salina, Kansas in 1928, “Bobby Joe” Nissen spent his childhood gathering knowledge of mechanics, carpentry, and electricity and learned how to can vegetables and sew alongside his sisters. The Depression and Dust Bowl drove the family to Albany, Oregon. As a teen, Nissen spent countless hours tinkering with automobiles. He once won a bet that he could run a Model T on butter and set a dirt-track speed record driving a hot rod he built from parts of 1930’s Fords.

World War II found Nissen and his father atop a 100-foot fire tower, serving as air raid wardens watching for Japanese aircraft that might reach the Oregon coast. A fan of CBS radio reporter Edward R. Murrow, Nissen received his FCC Radio license at the age of 14, and got a job at KWIL Radio introducing Big Band songs and reading wire-copy in a stentorian voice. He wired a hidden switch that if thrown, would burn out the circuits, rendering the station useless for any invading enemy.

Nissen attended Oregon State University, majoring in physics, minoring in philosophy, acting in radio plays and committing himself to social justice issues that would reverberate throughout his life. Objecting to his fraternity’s White Christian policy, he pledged a Jewish friend and a Black friend. When both were rejected, he left the fraternity. He became class president of some 5,000 students, enrolled in the Naval Reserve Officer Training Corps, and was commissioned Lieutenant in the US Marine Corps Reserve.

The opportunities and glamour of New York City drew Nissen east. He emceed at nightclubs in Greenwich Village and met an aspiring actress from Louisville, Henrietta Schlossberg. After one week of romance, he proposed and she accepted.

One week later, Nissen sailed to India on a previously-planned trip of discovery. He emceed at Bombay’s Taj Mahal hotel, sold cigarettes on the black market for rent money, and wrote articles as a correspondent for American newspapers. He interviewed Prime Minister Nehru, who told him that India was willing to help negotiate peace in Korea. After a severe bout of malaria, Nissen shipped home, and nine days after his arrival, he and his fiancée married. Henrietta changed her name to Cinde, short for “Cinderella,” indicating how she felt.

They settled in San Francisco, where Nissen secured a job as technical director at KRON-TV, and achieved several television firsts: the first live TV program from a flying airplane; first coast-to-coast broadcast via microwave; first color TV broadcast on the West Coast.

He worked with notables including Steve Allen, Shari Lewis and Julia Child. In 1956 he helped found KQED public television.

At home, Bob and Cinde recorded and released albums by the Limeliters and Pete Seeger. They were active in the “Ban the Bomb” peace movement, and hosted Paul Robeson and a Russian cultural delegation. The couple wrote a book manuscript warning that the U.S. was “swinging to the hard right toward a terrifying nuclear disaster.” Such activities made him the target of the House Un-American Activities Committee, and he was called to testify at a hearing. Referring to his Nehru interview, the Committee accused him of “offering his services to a foreign government” while he was a Marine. He was called a traitor by the Committee chairman. When asked to identify friends as communists and in response to other fabricated accusations, he pled the Fifth Amendment.

In 1962, Bob and Cinde moved with their three young children to Saint Louis, had another child, and made their house a station along the modern “underground railroad,” inviting civil rights volunteers to stay overnight on their way south to march with Dr. King.

When Nissen was promoted to General Manager of KETC public television, the Saint Louis Globe-Democrat ran a series of articles co-written by future conservative politician Pat Buchanan, targeting him as “a communist running our educational station.” Nissen received phone calls threatening violence, and every morning he checked under his car hood for explosives.

The silence from colleagues made it clear he was on a blacklist. After a brief move to Schenectady, the family settled in Port Washington in 1967. Nissen joined the Hubert Wilke Organization, and designed more than 200 TV studios and telecommunications facilities for clients in some 50 countries.

Port Washington provided ample performance opportunities for Bob’s growing family of actors and musicians. Port residents may remember the family from the many Play Troupe cast parties at their Ridge Drive home.

Starting in 1990, Nissen turned all his efforts to caring for Cinde, who had Alzheimer’s disease. They participated in multiple research programs, and stayed on the front line of the war on the disease. Cinde died in 2002, one year after their 50th anniversary.

In his mourning, Nissen was approached by a longtime theater friend of Cinde named Lilli Dzierzawski, herself widowed. They fell in love, moved into Lilli’s house in Manorhaven, and in 2004 became one of the first couples in Nassau County to register as Domestic Partners. He spent his last years gardening, travelling, writing and enjoying visits from his children Naomi, Gregory, Tim and Peter, and his grandchildren Callum, Lucy, Henry, Irina and Alison. He is remembered for his passionate sense of purpose as an iconoclast, activist, atheist, technologist, handyman, gardener and devoted husband and father.

His life will be commemorated at the Landmark on Main Street on Saturday, Aug. 28 at 1 p.m. (reception then event), in an afternoon of remembrances, readings and performances. RSVP at tinyurl.com/bobnissencelebration. The venue requires proof of vaccination for entrance.

—Submitted by the Nissen Family