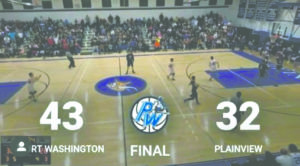 In what appeared to be their closest game of the season, the Port Washington Vikings inched out yet another victory on Jan. 17, defeating the Plainview Hawks, 43-32. Improving their record to 11-3, the Vikings put on display their athletic prowess, mental toughness and team chemistry.

From opening tip, the tone of the game was established. Playing under a packed crowd, the Vikings had an indisputable home court advantage. However, in the early stages of the game, Plainview remained undeterred. Thus, back and forth play was prevalent, resulting in a 17-17 tie at the end of the first half.

To say that the Vikings started the third quarter with momentum would be an understatement. Junior Dylan Trenaman single-handedly went on an 8-0 run, putting the Vikings up 25-17. The Vikings were in the driver’s seat, but the Hawks wouldn’t go down without a fight. With four minutes left in the third quarter, Plainview went on a run, and would finish leading by just one point.

Yet with the weight of the crowd on their shoulders, the Vikings stayed resilient, and outscored the Hawks 16-4 in the fourth quarter. Dylan Trenaman finished the game with 15 points and 7 steals, while Jalen Griffin had 8 points and 12 rebounds.
The importance of this win cannot be overstated. The Vikings stayed mentally tough throughout the game, something senior player Matt Schmitz is very proud of.

“Friday’s game really meant a lot to everyone on the team,” Schmitz said. “A win against a good team like Plainview definitely brings a lot of momentum into the rest of the season, and I feel really good about how we stack up against other teams in our conference.”
With the victory, the Vikings continue to play as a team, win as a team and paint their path towards the playoffs.

Charlie Mark has been a reporter for the Port Washington News since 2018, covering high school sports. Mark is a staff writer for the Schreiber Times, and hosts a weekly sports show on WDOT Port Washington Radio. For more Viking updates, follow his Instagram Account: @PortVikings.