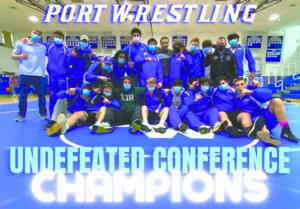 What an incredible season it was for the 2021 wrestlers. After digging deep and grinding through possibly the toughest, most challenging season in the history of their program, the Vikings earned a dominating, undefeated Nassau County Conference Title.

“This season was an incredible demonstration of hard work, dedication, perseverance and resilience by all,” Head Coach Anthony Schettino said.

Notable Finishes:
Senior RJ Holt would finish the season undefeated while completing the Nassau Championships with all pins. Holt becomes the fifth County Champion in Viking history. The perfect way to wrap up a four year career on the mats before looking to make an impact at the collegiate level.

“Captain Castillo knows and has what it takes to be the best in the state next season,” Coach Schettino said.

Another Nassau finalist came at 126lbs where Port had two All-County wrestlers while demonstrating their depth. Senior Captain Declan Neville put in his best career performance to date while securing multiple pins on his way to defeating multiple All-County wrestlers. Declan will take everything he’s earned and learned to the college mats next season while competing at the D1 level for Buffalo University.

“We congratulate Declan on an outstanding career and it’s important to note that Declan has two other siblings in our Viking wrestling program that are looking to follow in his footsteps, and then some,” Schettino said.

Also earning All-County honors at 126 was senior Captain and undefeated regular season wrestler Tyler Schettino. After a hard fought overtime battle in his first match at the Championships, Tyler would grind out four wins including a 2-1 war in his final match against another All-County opponent, ending an incredible career on a high note. Tyler will also be competing at the collegiate level next season at Roger Williams University.

At superheavy the Vikings would again show their depth by placing two more wrestlers at the Championships; freshman Leo Holt would hang tough while showing everyone the program will be in good hands for years to come while following in his brother’s footsteps. Holt will look to break some already lofty family records during his tenure as a Viking wrestler.

Then it was senior Captain, motivator and as Coach Schettino stated “by far the most improved wrestler in our program,” Michael Peneski. After one of the best off-seasons to date Mike had multiple come from behind victories including those by pin while fully earning his place in the record books as an All-County wrestler.

“I speak for the entire program while saying how incredibly proud we are of this young man,” the coach said. Once again showing the level of commitment by these seniors, Michael will also be competing at the collegiate level next season for Rio Grande.
Congratulations to these incredible young men for the many years of dedication, time, work and sacrifice they put in to earn these honors. They have made their coaches, families, Schreiber, our town and most importantly themselves incredibly proud.
Notable Awards: All-Division: John Hyde and Emerson Batres. All-Conference: Christo Freitas, Tommy Mascia, Matt Hellerman and Leo Holt. Conference Champions (undefeated): Tyler Schettino, Matt Castillo, RJ Holt and Mike Peneski. All-County: Tyler Schettino, Declan Neville, Matt Castillo, RJ Holt and Mike Peneski. 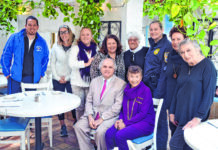 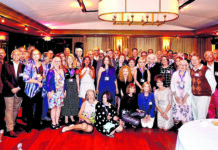