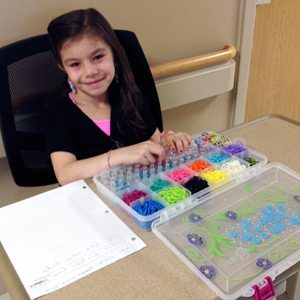 Port Washington resident Sydney Silverstein is not your typical seven-year-old. She has managed to turn a passion for making bracelets on a Rainbow Loom Kit into a full blown charitable endeavor, Sydney’s Rainbow Smiles.

The idea for the charity was formed when Sydney was visiting her great grandma, Granny Vivien, in the hospital in Florida.

At the West Boca Medical Center, Sydney took out her Rainbow Loom Kit to keep herself busy while she and her mom waited for doctors and nurses to report on Granny’s health. She made Granny “the coolest bracelets and rings ever” says her mom. Several nurses and hospital aides commented on how “awesome” they were. Without hesitation, Sydney made them each one.

She then had the idea to take the rolling table from Granny’s room and set up a station in the hallway. Sydney put out paper with a column for “Names” on one side and “Favorite Colors” on the other. People were signing up for bracelets within minutes of her sitting out there. In the three days that Sydney and her mom spent at the hospital multiple trips to restock the Rainbow Loom supplies were necessary.

Every single doctor, nurse, aide, physical therapist, and patient had a bracelet. Sydney insisted the patients who were old and couldn’t speak have a bracelet as well, “so that the IV in their arm looked prettier with the bracelet next to it.” Sydney explained that she loved seeing the smiles the bracelets brought to peoples’ faces.

On the way home to New York Stephanie made friends with a “beautiful lady” sitting next to her who happens to be a doctor at New York University Langone Medical Center. Before long, Sydney had taught her new friend Doctor Jessica how to make the bracelets and the remainder of the flight was spent chatting as all three, mom, daughter and Jessica diligently loomed bracelets.

Before landing, Sydney looked at Jessica, and asked her if she would do her a favor. Sydney took the 15 plus bracelets that she had on her arms and the 30 more they had made during the flight and asked Doctor Jessica if she would please go to the floor where the sick children are at NYU and give them the bracelets to wear while they were getting better. Needless to say, Dr. Jessica happily obliged. Sydney put them in a bag and wrote a little note.

Sydney was so excited at the idea of cheering up sick children that she decided to start her own charity and on the spot named it “Sydney’s Rainbow Smiles.” When asked how she came up with the name Sydney explains, “My name is Sydney, I made bracelets from Rainbow Looms, and they made people smile.”

When Sydney told her parents that she would like for people to donate jewelry that they make out of Rainbow Looms to her and she would then distribute them to local hospitals and ask for help in distribution to “far away hospitals” they embraced the endeavor wholeheartedly. Younger sister Sloane also works at making bracelets in her spare time.

The family has received bracelets from as far away as Canada and has distributed them as far away as a hospital in Cincinnati. As each shipment of donated loomed bracelets comes in Sydney writes a personal thank you note to the sender. The family bags each bracelet in a small plastic bag that bears the logo Sydney’s Rainbow Smiles.

Larry and Stefanie Silverstein say they “are so proud of Sydney.” It is clear from discussion with the Silversteins that Sydney has learned about giving from her parents. Stephanie is a teacher in Ozone Park, Queens. Many of her students do without things her children take for granted.

Stefanie has always encouraged Sydney and Sloane to join her in making cookies and lollipops for her students’ birthdays and to give them gently used toys as birthday gifts. “It’s never too young to learn to give to others. That’s the best lesson we can’ teach our children,” says mom.

Sydney is in the second grade at Guggenheim Elementary School and says she wants to be a research doctor when she grows up. Sister Sloane wants to be “the doctor in the office with people.” It is clear they are a dynamic duo.

And at 93 years young Granny is home and doing fine.

If you would like to add to the success of Sydney’s Rainbow Smiles you can send Rainbow bracelets to Sydney Sylverstein at 26 Driftwood Drive, Port Washington, New York, 11050, The family will continue to distribute them to hospitals all over the tri-state area personally, and ask for help in areas that the family can’t deliver to themselves.