Averie Masia, an accelerated eighth grade student at Weber Middle School in Port Washington, will perform with New York City Ballet stars Brittany Pollack and Daniel Ulbricht in New York Dance Theatre’s (NYTD) 38th season of The Nutcracker. Masia, a student at the Ohman School of Ballet in Commack, performs the lead children’s role of Clara in two of the four performances. Clara’s journey from her family’s Christmas party through the land of snow and land of sweets is central to this beloved holiday story ballet. This is Masia’s seventh year performing in the New York Dance Theatre’s production, now in its 38th season at Hofstra University. Performances are on Saturday, Dec. 14 and Sunday, Dec. 15 at noon and 5 p.m.

NYDT’s production is the largest Nutcracker on Long Island and the only one performed in the tradition of New York City Ballet’s Lincoln Center version. This year’s production will be the first without New York Dance Theatre founder and former New York City Ballet soloist Frank Ohman, who passed in July 2019 at age 80. Through the years, Ohman created original dances and scenes, which have been incorporated into the ballet and set his production apart from others on Long Island. As a former student and soloist under George Balanchine, he was one of a select few authorized to use the original pas de deux choreography of his mentor, which will continue to distinguish this production. Ohman’s traditional role of the grandfather in the party scene that opens the ballet will be left vacant this season in his honor.

Special guest artists Pollack and Ulbricht of New York City Ballet return to perform as the Sugarplum Fairy and her Cavalier. Pollack, a New York City Ballet soloist, made her Broadway debut as Louise in the 2018 revival of Carousel. Ulbricht, a principal dancer at New York City Ballet, has taught students at the Ohman School of Ballet, a division of New York Dance Theatre, as a master class guest teacher and in his role as artistic director of the elite New York State Summer School of the Arts (NYSSA) ballet program in Saratoga Springs.

With the elegant Christmas party scene, the drama of the magical growing Christmas tree, the battle of the toy soldiers and giant mice, the live snow storm and the brilliant dancing in the land of the sweets, The Nutcracker appeals to all ages. In all, a cast of 80 children, pre-professional and professional dancers will bring this classic story ballet to life on the stage of the John Cranford Adams Playhouse. The children’s roles are performed by students of the Frank Ohman School of Ballet in Commack, representing a variety of towns in Nassau and Suffolk Counties. 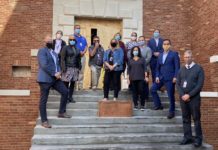 School SupPORT: A Day In The Life Of A Fully Virtual HS Student

School SupPORT: A Day In The Life Of A Fully Virtual...