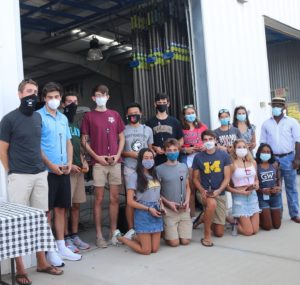 Despite the coronavirus pandemic cancelling many in person graduation ceremonies, members of the Friends of Port Rowing gathered together to hold a small graduation and awards ceremony to celebrate their graduating seniors. The small ceremony, limited to 50 people due to the pandemic, was held at the Port Rowing Boathouse located at North Hempstead Beach Park in Port Washington.

This year’s seniors, comprised of 17 students, were all given a miniature set of oars showing their graduation year from the Port Rowing program. Isa A. Rahman, Head Coach of the Women’s Team, and Mike MacMinn, Head Coach Men’s of Team each gave speeches reviewing the season and highlighted the determination and commitment the athletes had during the COVID crisis.

“It was so special to be able to have an in-person gathering for the graduating seniors,” Vernon McDermott, President of Friends of Port Rowing, said. “For most of the rowers, all of their in-person celebrations had been cancelled or converted to some type of virtual substitute, so there was a lot of excitement to have the teammates celebrate in person with their parents in attendance to see them, even though the gathering was limited to 50 people.”

“Her family and friends wanted to find a way to honor her and carry on her memory,” Friends of Port Rowing’s website states. “It was important that this endeavor highlighted what Sue loved and valued and would leave an enduring imprint of her essence.”

After meeting several criteria, including demonstrating strong character and good sportsmanship on the team, this year’s recipient received a $1,000 educational scholarship.
During the ceremony, the Port Rowing boathouse was also named “The Mitchell Tamkin Boathouse” in honor of their President Emeritus, Mitch Tamkin. Tamkin served as President of the Friends of Port Rowing for more than 10 years and was instrumental in advancing the program and getting the Port Rowing Boathouse built.

Although the pandemic ultimately forced all indoor group athletic activities to be cancelled, training sessions were able to be moved to a virtual setting. However, on July 6, Governor Andrew Cuomo announced that low-risk youth sports were allowed to begin again. The graduates were able to resume rowing on Hempstead Harbor. Despite the pandemic, the crew pushed on.

“So many rowers stayed engaged following detailed training regimens, participating in zoom sessions, sending videos to coaches and receiving personalized evaluations,” McDermott said. “There were even virtual regattas set up against other teams. Unfortunately without the barbecues and the tents.”

“As we get used to our new normal it is paramount to keep everyone engaged mentally and physically,” McDermott said. “Rowing Crew in North Hempstead Park is great way for us all to stay in shape and engaged. It is a great resource that we have in our community.”

For more information about Friends of Port Rowing, contact Coach Emilie at emile@portrowing.org for more info or visit their website, www.portrowing.com.