The Port Washington Rowing team has embarked on yet another spring season. The team is led by head coach Michiel Bartman, former head coach of the lightweight teams at Harvard University. The team is returning from an impressive fall season, with success in events such as Row to Fight 2018 and Head of Schuylkill 2018.

The team has a very clear objective: to build men and women of character. Their mission statement reads: “Port Rowing builds strength and character, teaches sportsmanship and discipline, and instills self-confidence for teens and adults on Long Island through the sport of rowing.”

With this, Port Rowing has established itself as a premier rowing club on Long Island. In past years, teams have received gold medals in the Long Island Championships as well as the New York State Championships. Members have gone on to row with prestigious institutions, such as the University of Pennsylvania and Cornell University.

In an effort to expand upon their mission, the team has hosted Row for Autism for the past seven years. The purpose of this initiative is to provide an opportunity for the participants to showcase themselves, while raising awareness for autism advocacy. Since the inaugural Row for Autism in 2012, attendance has nearly quadrupled. Rowing clubs from the tri-state area and Long Island come to race in Hempstead Harbor, and awareness has continued to rise.

Port Rowing participated in the annual Row for Autism event on Sunday, April 14. Participants across Long Island included Cold Spring Harbor, Manhasset and Syosset. Port achieved great success at the event, with the boys team receiving third place and the girls varsity team coming in second place. Their victories aside, it was the combined success of all teams that resulted in the spread of autism awareness.

Overall, the Port Washington Rowing team has one primary mission: to build men and women of character. Through their participation in the Row for Autism event, we see that they are achieving this objective to a very large extent.

Charlie Mark is a sophomore student at Schreiber High School. He hosts a weekly radio show at WDOT Port Washington Radio, and is a staff writer for the Schreiber Times. 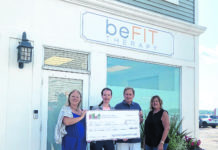