If you have a painting, photo or a document that you want to not only preserve but show off, you may do what many other Long Islanders have been doing for nearly five decades; have it professionally treated and framed by Cameo Gallery of Hicksville, a professional framing company nestled away on Burns Avenue near Broadway Mall.

Cameo Gallery has a great deal of history, having been in existence for almost 50 years and counting. The business was started in 1967 by a local couple at a Farmer’s Market situated right around the corner, according to current owner Ken Casser, who lives in Port Washington.

“The business remained there until the Farmer’s Market burned down about 15 years after they started, at which time they moved here,” he said. “I took it over about 13 years ago when the couple retired, and it’s been a wonderful business.”

Upon walking inside the gallery’s unassuming exterior, you will find yourself surrounded by an atmosphere of creativity and craftsmanship, not to mention frames, frames, and more frames of every conceivable shape, size and design, spread out over 3,600 square feet. The business includes a showroom and, behind the scenes, a twisting labyrinth of workshop space where all the real labor is done.

Casser has always been a woodworker, photographer and involved in art in one way or another, so taking over a framing store seemed like a good fit, he said. “I started out as a guitar player, and when I figured out that the world didn’t need two James Taylors, I decided I needed to do something else with my life,” he said. “I worked in my father’s handbag business and I was able to successfully sell it. Then I did a few other things and when I noticed Cameo Gallery’s sale ad was in the newspaper, I thought it suited me.”

Casser’s experience and expertise in the surprisingly complex field of framing is all too apparent. Certified in his craft by the Professional Picture Framers Association, the only such individual on Long Island, Casser said that he is constantly studying and is retested every four years to ensure that he is at the very cusp of framing and art preservation knowledge.

“I help customers decide what looks good around their artwork…I understand the different treatments that certain types of artwork need,” he said. “For example, pastels require a different protective treatment than a photograph, and a photograph would require a different treatment than an oil painting or watercolor. I also do art and picture restoration here and I have a network of people that I use for more extensive projects.” 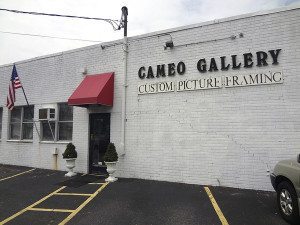 All work is handled on the premises by Casser himself. He cuts the mats, chops and joins the frames, buys the molding and cuts it to size and everything else you can imagine. On a regular basis, Casser said he’s tested to discover new and innovative ways to protect and display different and unusual items that his customers bring in.

“I had a customer who had returned from Egypt and had a papyrus with incredibly delicate, beautiful artwork,” he said. “So I constructed a base for it and encased the papyrus in double-sided UV-filtering plexiglass so both sides could be displayed while it stood upright on his desk. That was pretty cool.”

Cameo Gallery is a unique entity in the Long Island framing field for good reason. Not only are they the best at what they do, they also don’t really have much in the way of competition. Thus, unlike many merchants in today’s rough economic climate, Casser noted that business—especially with the extremely positive word-of-mouth that Cameo gets—is always good and remains a very interesting and fulfilling part of his life.

“I have great customers,” he said. “They always come back and I get new ones every week. It’s fun to work with them. We’re in a good location and people always find us.”

Cameo Gallery is at 5 Burns Ave. in Hicksville. Visit their website at www.cameogalleryli.com.