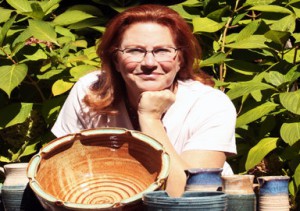 For Patricia Bridges of Port Washington, life is all about symmetry with a dash of whimsy.

She works with clay, molding it into myriad shapes and sizes to fill an inner need and outward desire to have her work admired.

Most recently, that admiration came as a nominee in the craft category of the Martha Stewart “American Made” contest, which showcases up-and-coming artists. She was the only potter representing Long Island, and despite garnering just under 4,000 votes, was not chosen a winner for the contest that wrapped up last week.

But, the outpouring showed just what kind of fan base she has built, especially in Port Washington.

“I have been working in clay for several decades,” Bridges says. “I am primarily self taught.”

In other words, “No Masters of Fine Arts here,” she said.

Instead, as a kid, she had “great support” from her father, an artist who worked in iron.

As a young adult, she apprenticed to learn her craft from some great potters who created pieces in the traditional New England style of functional ware. Functional ware includes items such as plates and bowls. “My interest in creating ceramic pieces is that they are used by people,” Bridges said. “I don’t want to make things that people just put on a shelf, look at, and never use.”

Her work has always been driven by pieces like butter dishes, serving platters and cereal bowls “that serve a purpose,” Bridges said.

Bridges estimates she has put in a decade learning her craft. She describes herself as “a one woman studio potter,” meaning she doesn’t mass produce.

“I have a small studio of my own and I teach adult ceramics at a nearby studio,” Bridges says. “My business has greatly evolved over the past four years, from a small one with only local presence, to a larger business that ships to clients internationally.” Most of her business is based off her website, bridgespottery.com.

Bridges has something that most potters don’t: an MBA in marketing, and she uses those skills to expand her business.

“Demand for my work is growing beyond the existing capacity I have in my small studio” she says, referencing the studio in her Port home.

Her next goal is finding a more mainstream partner, like a retailer, for one or two of her lines to expand their distribution. 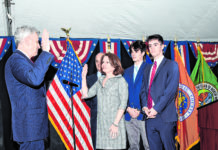 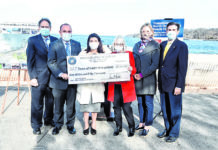 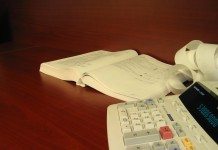