More than 25 people attended the first meeting of the ad hoc Port Washington Parking Committee, which is meant to address changes that are going on at the Port Washington Railroad Station, a busy hub that is the last stop on the New York City line.

The objective is to come up with proposals to present to the community for consideration in the spring.

Town councilwoman Dina De Giorgio, who is running for Town Supervisor and whose district is Port Washington, is heading the committee. De Giorgio said that the need for the committee became critical once the LIRR announced its plan to install two additional train storage tracks at the station. The railroad’s project will result in the loss of at least 40 commuter parking spots. There are no estimates as to how many spots may be unavailable during construction.

The group broke up into sub committees: commuter parking, LIRR proposal and merchant/retail parking. The entire committee will meet once a month. The invitation-only committee is made up of representatives of community organizations, police, fire and other special districts, along with representatives of each village, and a few members of the general public who were invited because of their specific expertise in city planning, engineering and architecture.

During the meeting De Giorgio encouraged participants to “think out of the box. We want to find out what the public is most concerned about and try to propose solutions to address those concerns.”

De Giorgio is actually picking up an initiative started in July by Residents for a More Beautiful Port Washington (RFMBPW) when they held a series of meetings about the future of commuter parking in Port Washington. When asked to comment on the committee that De Giorgio has formed, the Board of Residents released a statement.

“We see Councilwoman De Gorgio’s committee as an outgrowth of the meetings RFMBPW facilitated in July with representatives from community groups, villages and special districts. It is our hope that going forward Councilwoman De Giorgio’s committee will analyze the issues and goals raised during these July meetings, including the need for more information, public dialogue and planning, and reach a consensus on recommendations moving forward.” 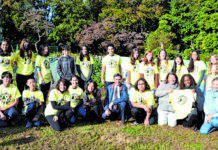