Main Street’s Bow Tie Cinemas will welcome the community to view a free premiere of 3 Teams: A Youth Sports Story, on Monday, Dec. 2, at 7 p.m.

The documentary was produced and directed by Port resident Robbie Weingard, who not only starred on Hofstra University’s basketball team, but captained the USA basketball teams in the Maccabiah games, often described as the “Olympics for Jewish athletes.” Today as a father of three, he has dedicated much of his time to coaching basketball to his children and many in Port.

Weingard’s film sets out to identify the challenges that parents and coaches face in today’s youth sports culture.

According to Weingard, everything now is “hyper-accelerated,” with kids as young as first grade playing in travel teams. “Many of us all live in this day-to-day, week-long sports world,” said Weingard, who doesn’t think kids are being given the right bang for the buck: not enough proper instruction and too much emphasis on victory.

“There is too much pressure to win,” Weingard said. “Too much travel and competition and we’re not teaching the kids how to really play the sports that we’re all screaming about from the sidelines,” he said. “There’s such an enormous emphasis to win at these young ages, before kids really take in the fundamentals.”

“After watching this film, I became very excited to be able to put this feature on the ‘silver screen,’” said Dan Ostrander, general manager of Bow Tie Cinemas of Port Washington. “I can personally identify with 3 Teams because as an athlete in my youth, those were the best years of my adolescence.”

For the past five years, Weingard has been running his popular Scotty Workout Basketball Clinics (in memory of his late brother who perished in 9/11). These clinics aimed to teach kids the fundamental basketball skills they’ll need by the time they reach middle school. He’s proud to share his skills and techniques.

“When you’re child comes to my class, I do everything in my power to teach him or her a skill set to last a lifetime,” Weingard said.

Kids today are over-scheduled and overplaying: “When I was in seventh grade, I played four basketball games in a year,” Weingard said. “Today kids can play four games in one weekend.”

They don’t get the chance to practice and get better, because the emphasis is all about playing games upon games upon games, he said. “As a kid, we still had Little Leagues, but the schedules were ‘normal.’”

Weingard recalls his sports days as a kid as being very different than it is today. These days, kids don’t usually go out to play without an adult supervising. “When I was growing up, my friends and I got off the school bus, ran inside to have a cookie, and then went to a friend’s house to play ball until it got dark,” he recalls. The ages of kids participating was never an issue. “Usually the oldest kids picked the teams and we had fun,” he remembered fondly. “We’ve taken all of this growth opportunity out of the picture.”

Port News asked Weingard what he hopes will come out of his film. For sure, he wants kids to walk away with something positive. He hopes that parents, coaches and kids alike will see what he has seen. “It’s too much, too fast, too young, and we are taking childhood away from our kids,” he said.

He feels that although there are parents that will completely disagree with his perspective, he hopes he can reach the millions of parents stuck in the middle, not knowing what direction to take. “If those parents finish watching the film and say to themselves, ‘Let’s slow it down for our kids,’then that alone would be a wonderful victory.” 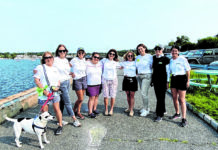